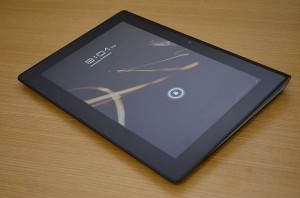 An innovative new gadget was introduced to the tablet world at the Mobile World Congress in Barcelona, Spain.  Introducing… Sony’s Xperia Tablet Z.  This 10.1” tablet replicates the straightforward, angular design aesthetic of Sony’s Xperia Z Smartphone.  It’s just 6.9mm – making it the thinnest 10.1” tablet available – and weighs in at a trivial 1.09 lbs.  The Tablet Z presents one of the most attractive, well-engineered models on the tablet market.

But what does the Tablet Z offer to make it stand out from the iPad and other competing tablet platforms?  Well for one thing, it’s waterproof.  That means you can use it in the shower or in the rain without worry.  The Tablet Z’s camera features go beyond the tablet standard.  The rear camera has 8 megapixels and the camera app is modeled after the interface used by Sony’s standalone digital cameras.  An infrared port allows buyers to use the tablet as a universal remote.  The TV SideView is an update on Sony’s guide to TV shows on cable, Netflix and other sources.  Tablet Z owners can play music over a Sony.

With the Xperia Z Tablet, Sony has set its competitive sight directly on Apple’s iPad.  The Tablet Z pricing options are the same as those of the iPad, placing it on a higher tier than cheaper tablets like Amazon’s Kindle Fire.  Unfortunately for Sony, the Tablet Z’s operating system – Android Jelly Bean 4.1 – does not have many apps intended for large-display tablets yet.  In today’s app-crazed society, this could prove to be a major obstacle for the Tablet Z’s sales.  Will the Tablet Z’s sleek design and innovative features be enough for it to rival the app-plentiful iPad?  What do you think?