Yes, You Can Use Your Phone On a Plane. Just Not to Talk 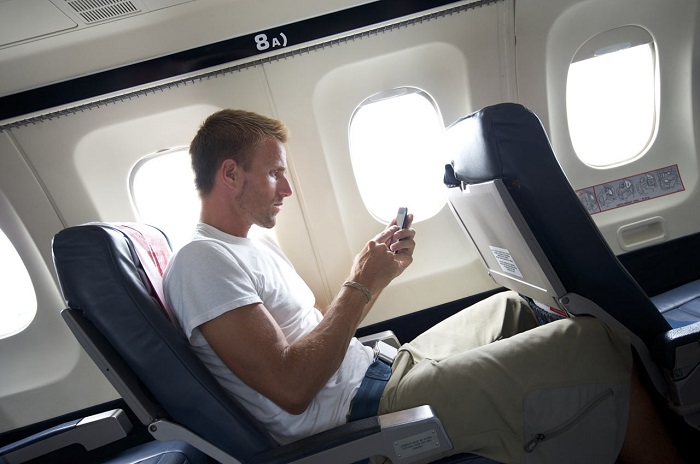 As the business jet climbs past 10,000 feet, Gogo Inc.’s onboard wireless network latches onto the Internet, and digital addicts fire up their smartphones.

Fingers fly across keypads on this demonstration flight over Manhattan to let users try an app called Text & Talk from the largest U.S. airline Wi-Fi provider. Only there’s little talk.

As U.S. airlines navigate the new era of passengers allowed to stay connected through flights, technology may prove less powerful than American standards of etiquette. Gogo’s airline customers have told the company to block phone calls when the feature is added next year.

Allowing onboard phone calls would add “just another duty for the beleaguered flight crew, who will have to keep saying ‘ma’am, the pilot can hear you all the way up in the cockpit’ and ‘sir, there are three babies on board whom we hope not to awake,’” Judith Martin, known to readers of her newspaper column and books as “Miss Manners,” said in an e-mail.

“They think it would be uncomfortable to listen to the person next to you talk on the phone,”Michael Small, chief executive officer of Itasca, Illinois-based Gogo, said in an interview. “We’re going to respect that. It’s going to be the airlines’ call.”

Phone calls are allowed on many non-U.S. airlines and tolerance is high among passengers,Aurelie Branchereau-Giles, a spokeswoman for the in-flight connectivity company OnAir, said in an e-mail.

The closely held company, headquartered in Geneva, offers a satellite-based service that lets people connect using their smartphones via an onboard network. Clients include British Airways Plc, Singapore Airlines Ltd. and Aeroflot. About 10 to 15 percent of usage is voice calls, she said.

“We haven’t heard of a single complaint about people making calls” since the service started in 2007, Branchereau-Giles said. “An aircraft is a noisy environment, so the sound of a conversation doesn’t carry very far.”

Also, she said, flight attendants can shut off the voice capability during night flights “to avoid the possibility of disturbance.”

“Voice communications, or voice calls, in a confined space such as an aircraft is simply something our customers do not want,” Paul Skrbec, a spokesman for Atlanta-based Delta, said in an interview.

Cabin crews may find passengers focusing on phone conversations instead of safety briefings,Corey Caldwell, a spokeswoman for the Association of Flight Attendants union, said in an interview.

“This is an issue we’ve been concerned about,” Caldwell said.

Cell phone conversations are inevitably louder than people speaking directly with each other, “and we also know from experience how well voluntary restraint works,” Martin said.

Amtrak, the U.S. national passenger railroad, established its first “quiet cars” in the Northeast U.S. in 2000. They’re now offered on certain other services. Passengers in those cars can’t use devices that make noise and must leave the car to make or receive calls.

Read more: Yes, You Can Use Your Phone On a Plane. Just Not to Talk

User rating: 0.00% ( 0
votes )
Are You Earning Too Little? If You’re Ready to Take on the World, Focus Is Key to Global Success