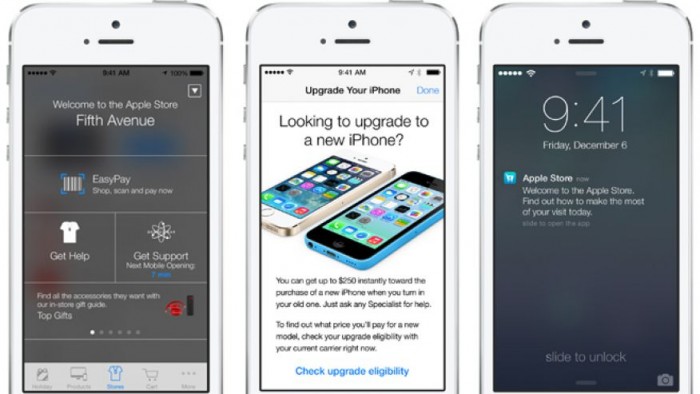 NEW YORK –  GPS will tell you how to get to the nearest Apple store. With iBeacon, Apple hopes to guide you around once you’re inside, whether it’s to pick up an order, upgrade to a new iPhone or shop for a pair of headphones.

On Friday, Apple will begin using the technology at its 254 U.S. stores to send you messages about products, events and other information — tailored to where you are inside, provided you have downloaded the Apple Store app and have given Apple permission to track you.

Using the iBeacon feature, the app will notify you if the computer you ordered is ready to be picked up, for example. Show a clerk your screen with the order number, and the clerk will get it for you. Walking by an iPhone table? You may get a message asking if you want to upgrade, check your upgrade availability and see if you can get money for trading in your old phone.

Walking by an iPhone table? You may get a message asking if you want to upgrade.

The company demonstrated the technology to The Associated Press this week at its busy, 24-hour Fifth Avenue store in New York City. At this particular store, Apple has installed about 20 iBeacon transmitters, some of which are simply iPhones and iPads, which come with the capability as part of the iOS 7 mobile software released in September. The transmitters use Bluetooth wireless technology to sense your exact location. That’s not possible with GPS, which don’t work well indoors and aren’t good at distinguishing between locations that are just a few feet apart.

The beacons can be adjusted to specific distances, so you may get some notifications regardless of where you are inside. Others will come only when you are standing at a particular aisle, wall or product demo table. The store can also send out notifications about deals or upcoming events.

The implications go beyond Apple stores. One day, commuters might get information on subway delays as they stand on the platform, while museum visitors might get details on the painting they are standing in front of. Other retailers, of course, will be also able to offer special deals or track which aisle shoppers spend the most time at.

In-store location technology does raise privacy concerns, though many shoppers have shown a willingness to be tracked if there’s something in it for them.

Major League Baseball already plans to use the technology next year to customize fans’ experiences at its ballparks, provided they download the At The Ballpark app to their iPhones or iPads and have iOS 7 installed. In a demo earlier this year, MLB officials showed how the app can offer special features based on users’ location in a stadium, such as coupons in the souvenir shop or a video that plays near landmarks.

Apple is not the first to offer in-store location technology. An app called Shopkick, for example, sends users discounts when they enter Macy’s, J.C. Penney and other stores. But Apple’s entry into micro-location puts the nascent technology into the hands of thousands of developers and broadens its reach considerably.

User rating: 0.00% ( 0
votes )
Is Your Small Business Getting All It Can from the Federal Government? Did You Give Thanks this Weekend for the Fed’s Easy Money Policy?