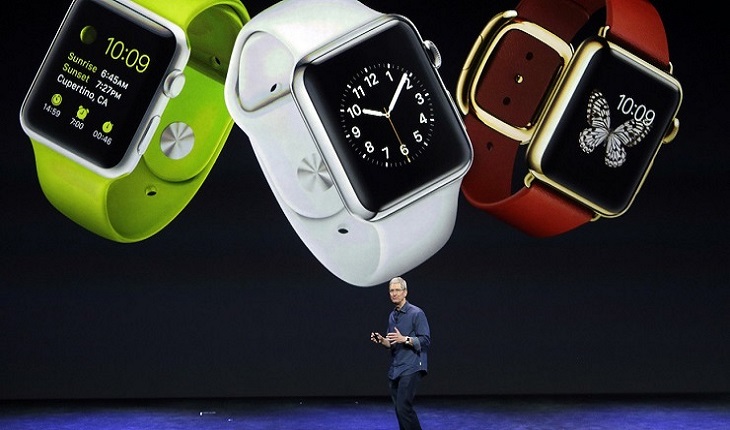 Apple AAPL -0.35% finally showcased bigger iPhones, mobile payments and its first smart watch on Tuesday. The two-hour event was hosted by CEO Tim Cook and topped off with a musical rendition from U2. Apple left behind a few lingering questions, such as what the battery life of its iWatch would be, and how much consumers could trust its new Apple Pay system with their credit card details, when many are wondering if they should trust the company at all with their photos.

While those questions are still up in the air, here are six of the most important moments from Apple’s unveiling today, and their implications.

1) The Launch of Bigger iPhones

For years Apple has staunchly kept its iconic iPhone to a standard 4-inch diagonal screen size. No longer. The company confirmed multiple rumors that it was launching a thinner but, much-bigger 4.7-inch iPhone 6, and a 5.5-inch iPhone 6 Plus.

There was no eating humble pie for the company whose founder Steve Jobs once mocked bigger phones from Samsung as something people wouldn’t want to buy. Instead, Apple’s marketing chief Phil Schiller confidently stated that “they’re a lot bigger,” while Cook said these were the best iPhones Apple had ever made.

Apple has essentially accepted that the market has moved in a direction is founder didn’t predict: the number of so-called phablets in activation has doubled in the last 12 months, according to app tracking firm Flurry. People want bigger phones. Now Apple is finally jumping on the bandwagon led till now by Asian manufacturers like Samsung and HTC .

A far more diverse range of iPhones should help maintain the bottom line of Apple’s all-important iPhone business, which brings in 70% of all profits. Having brought out the low-cost 5C this time last year, it can now also differentiate on size with the bigger, premium iPhone 6 Plus.

Half-way through the event Tim Cook gave everyone the moment they’d been waiting for, as the screen behind him flashed the iconic words “One more thing.”

“We believe this product will redefine what people expect from this category,” he said. “It’s the next chapter in Apple’s story.”

As Cooked walked off the stage, the arena went dark. The main screen then showed a slow-motion video of the Earth turning, and then a shiny silver smart watch coming into view, backed by dramatic music.

This was the Apple Watch, a stainless steel wearable gadget with interchangeable straps and a scrolling button on its side that was reminiscent of the iPod’s original scrolling wheel.

The watch looks remarkably like the Samsung Gear smart watch and is, essentially, a first-generation product, meaning that like the iPhone and iPad, it will likely get thinner and sleeker. The Apple Watch will start at $349 and doesn’t start shipping till early next year.

A big question mark remains over the battery life, an issue that has beset other smart watch makers including Samsung, whose Gear smart watch typically needs to be charged once a day.

3) The Launch of Apple Pay

Now that Apple had expanded its iPhone line-up and staked its claim to the wearables category, it had another completely new area to enter: payments.

Apple has long shied away from putting NFC technology in its phones, allowing customers to tap an iPhone onto a terminal to pay for something. That all changed today when Cook unveiled Apple Pay, a mobile wallet that would store a user’s credit card information for quick and seamless transactions.

What’s remarkable about the announcement was that Apple appeared to have already bagged a range of companies ready to accept transactions through Apple Pay in the U.S., including Target, Starbucks, Whole Foods, Uber and Groupon, and that it had also sealed partnerships with Visa, MasterCard and American Express.

Mobile payments is a tough, low-margin business — just ask Square — so investors shouldn’t expect Apple Pay to make a big impact on the business of a company projected to bring in $192 billion in revenue next year. Still, analyst Gene Munster from Piper Jaffray, says Apple Pay could ultimately help the company’s profits. “We view Apple Pay as the most compelling service Apple has offered since iTunes,” he said.

Back to the Apple Watch. Apple’s historic strength has always been hardware and design, but it has managed better than most tech companies to marry that with intuitive software interfaces as well. Designing software for a small-screen wearable device was always going to be an even bigger challenge, but Apple appears to have made some unique advancements here with the ability to zoom into a screen of moving, circular apps with a Digital Crown scrolling wheel for navigation

One of the more compelling moments came when Apple executive Kevin Lynch demonstrated how the watch’s “taptic engine” worked with Apple Maps. When following directions on the device, the watch would send different types of vibrations — or taptic feedback — based on whether the wearer should turn left or right.

The ultimate feeling, he said, was of an invisible guide that you didn’t see or hear but could still understand. This “creates a feeling that is noticeable to you, but not to anyone else,” said Lynch. That could be a key selling point for consumers who’d prefer to feel their watch judder than make notification sounds for all to hear.

Another Digital Touch feature allows users to draw simple sketches on the Apple Watch to send to other wearers – essentially do-it-yourself emoji.

Pressing two fingers on the screen takes advantage of the watch’s heart rate monitor to send your heart beat. Texting your biometrics could certainly lead to some dynamic conversations.