Where We Live: Barracks Row has gone from grit to glamour 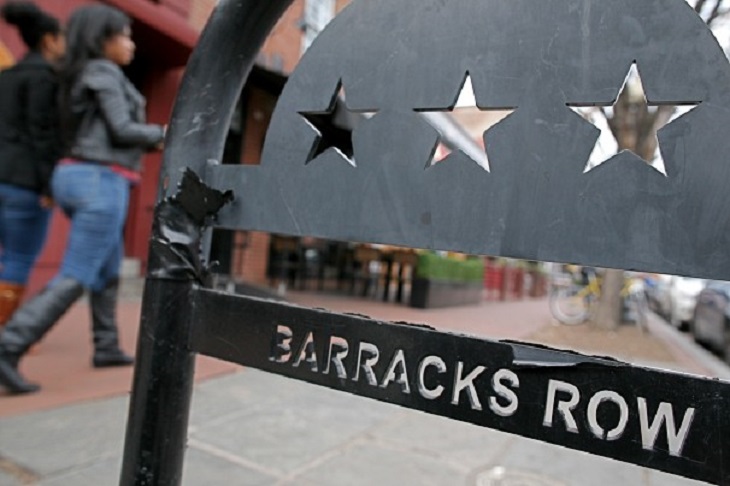 Sylvia Moraes says a cross-generational transformation is taking place where she lives, off Barracks Row in Southeast Washington, and even at her local Catholic church, St. Peter’s.

“There were a lot of funerals. Now there are a lot of marriages and baptisms,” said Moraes, 80, referring to the area’s growing appeal among parents of young children.

Barracks Row’s brisk foot traffic seems to keep time to one of the 136 robust marches crafted by District native John Philip Sousa, who, in his time, was the most renowned residents of the surrounding Capitol Hill neighborhood. Sousa, who composed classics such as “The Washington Post March” and “The Stars and Stripes Forever,” conducted the Marine Band at the Marine Barracks, the eponymous anchor of the bustling commercial strip.

Along Eighth Street SE, an easy walk from the U.S. Capitol, you can indulge your senses in a seemingly endless array of pleasures: fresh sushi, boutique cupcakes, cat adoptions and acting classes sponsored by the Shakespeare Theater Company.

There’s also a modest collection of one-story houses, referred to as “shotgun” dwellings, which are common in the Deep South. “The front door and the back door are aligned,” said Moraes, who has owned the home since 1999 but lived in the neighborhood for more than 40 years. “You could shoot a shotgun through the front door and hit the kitchen.”

Moraes’s home — which has four white columns on its front porch and one of the few garages in the neighborhood — is a block east of the epicenter of activity.

A community reborn: Follow the signs that mark the Barracks Row Heritage Trail and you’ll learn that William Prout, an English-born builder, sold or traded land to the feds in 1799 and 1801 in exchange for the Navy Yard and the Marine Barracks.

One of the most handsome structures in the area is the Old Naval Hospital at Ninth Street and Pennsylvania Avenue SE. During the Civil War, it housed Confederate soldiers who were taken prisoner. Over the years, the structure served as a training school for sailors to learn nursing and other subjects, and later a temporary home for old soldiers and sailors. In 2000, the community banded together to restore it, and it was reborn as Hill Center at the Old Naval Hospital, featuring a long roster of recreational, educational and cultural programs.

Barracks Row’s reputation as a seedy and dangerous slice of the city has essentially evaporated, residents said.

Its change in fortunes has been the result of a concerted effort by residents and small-business owners. Since its founding in 1999, the nonprofit Barracks Row Main Street group has worked to renew and reenergize the strip by replacing worn sidewalks with brick pavers and dead trees with disease-resistant American elms.

Delighting the palate: Stroll along Eighth Street and you can sample exotic teas from a sidewalk container, breeze into a wine boutique or huddle with Washington Nationals fans for pre-game drinks at the Ugly Mug.

And, if you have the patience and the stamina, you can brave the long line — sometimes exceeding 100 hungry, curious souls — in front of Rose’s Luxury. The eatery, which opened in 2013, was named Best New Restaurant in America this year by Bon Appétit magazine.

Rose’s owner Aaron Silverman, 32, said he chose the Barracks Row location “because it’s lovely.” He lives in the area as well. When he manages to break away long enough from his grueling schedule, where he marries unlikely flavors such as spaghetti with strawberry and tomato sauce, he finds time to eat in other restaurants. His favorite: Ted’s Bulletin, “for the coffee and the eggs.”

Iris Burnell, who operates a Jackson Hewitt tax-preparation office on Barracks Row, called the area “a very warm neighborhood.” In 1995, when she opened her franchise outlet, the community, she recalled, was “still warm, but it wasn’t as affluent or busy” as it is today.

It was an era when her husband of 42 years, a former member of the Marine Band, would enjoy strolling two blocks over to Mr. Henry’s to listen to live performances by legendary songstress Roberta Flack.

Living there: Barracks Row is a five-block stretch of Eighth Street SE from Pennsylvania Avenue south to the Washington Navy Yard at M Street SE.

In the past year, 297 houses sold in the 20003 Zip code, which covers Capitol Hill Southeast, including Barracks Row, said Rachel Abramson, of Capitol Asset Realty. The prices ranged from $332,500 to $2.85 million.

Buyers looking in the immediate vicinity of Barracks Row don’t have a wealth of choices at the moment. According to the online real estate sites Zillow and Trulia, there’s just one active listing less than a block from the action, a two-bedroom, 2 1/2-bathroom rowhouse listed at $890,000.

Moraes, a retired self-employed interpreter whose clients included the State Department, was recently offered $659,000 for her home, for which she paid $219,000. She accepted and is slated to move out by year’s end.

Read more: Where We Live: Barracks Row has gone from grit to glamour