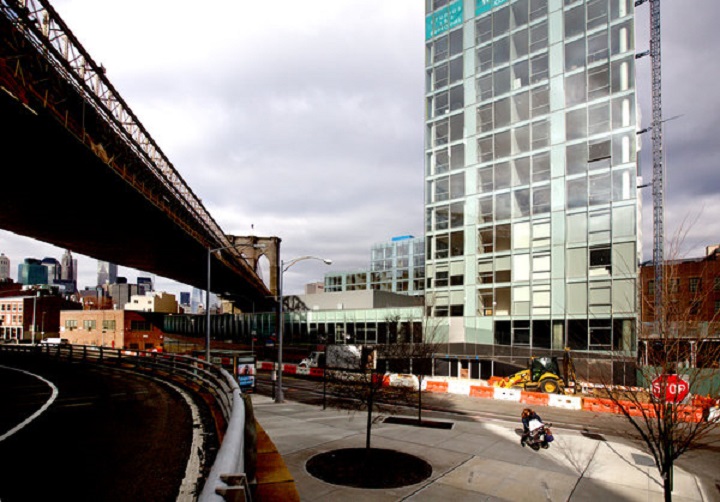 For renters looking for new construction in Dumbo, a Brooklyn neighborhood with scant space to build, 60 Water Street has begun leasing 232 market-rate apartments, many with stunning East River views. But for many residents, historians and preservationists, the glassy complex with a 17-story tower is an eyesore that obstructs historic views seen from the Brooklyn Bridge.

Dumbo is defined by its gritty, industrial architecture, with hulking warehouses set along narrow, Belgian-block streets that snake between the Manhattan and Brooklyn bridges. But 60 Water Street, with frosted fins tracing its facade, delivers to the area an unabashedly modern neighbor, with most units priced slightly higher than the neighborhood average. The complex, designed by Leeser Architecture and Ismael Leyva Architects, will eventually include a 300-seat middle school on Dock Street, ground-floor retail on Water Street and a parking garage on Front Street. It also has 58 affordable units, with tenants selected from a pool of more than 10,000 applicants.

“The product itself is not like anything else in the neighborhood,” said Charles Homet, an associate broker at Halstead Property who lives in Dumbo. “It’s shiny and new.”

Opponents of the 425,000-square-foot development built by the Two Trees Management Company tried in vain to block it when the site went through a lengthy land-use approval process in 2009. The roster of notable critics included the actors Helen Hunt and Gabriel Byrne, along with the documentary filmmaker Ken Burns and the writer David McCullough, author of the 1972 book “The Great Bridge: The Epic Story of the Building of the Brooklyn Bridge.” Nevertheless, the development handily won City Council approval.

“We had taken every measure beyond belief” to block the project, said Doreen Gallo, the director of the Dumbo Neighborhood Alliance, a nonprofit neighborhood advocacy group.

For opponents of the plan, the result has confirmed their fears. “The views that used to belong to the public now belong solely to the people who inhabit that building,” said Paul Graziano, an urban planning and historic preservation consultant who advised groups opposed to the development. “The idea that you no longer have the ability, as you’re walking up the bridge from Brooklyn, to see the rest of Brooklyn and much of uptown is really tragic.”

The developers counter that the public has not lost scenic views in any substantial way. “The building blocks views — all buildings block views,” said Jed Walentas, a principal of Two Trees Management.

The views from the interior are certainly impressive. Floor-to-ceiling windows provide intimate views of the Brooklyn Bridge, which is a mere 85 feet away. From some units, the bridge seems almost within reach, although soundproof windows muffle the noise. With modern, minimalist interiors, units have wide plank oak floors and white Caesarstone countertops.

Unlike other new construction projects that pack buildings with an array of perks, the amenity package at 60 Water Street is modest. Tenants will have access to a gym and a 6,000-square-foot roof deck landscaped by James Corner Field Operations, a designer of the High Line.