Why Jon Stewart and Brian Williams should just switch jobs

Feb 11, 2015Jeremy ParkinsonEntertainmentComments Off on Why Jon Stewart and Brian Williams should just switch jobs 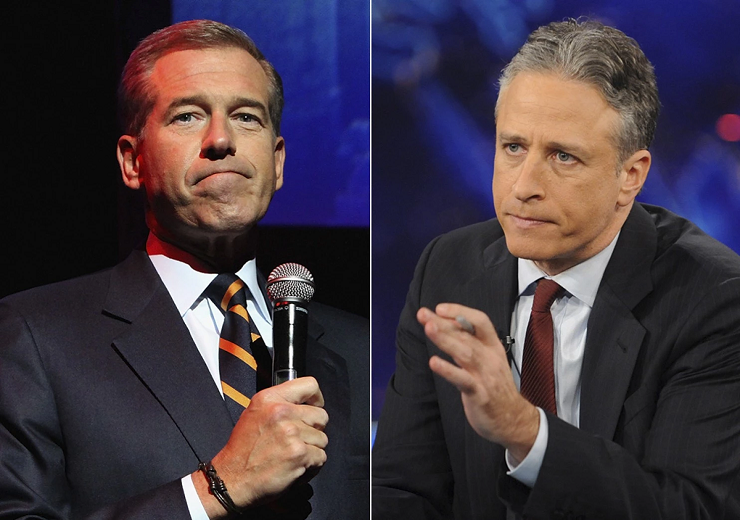 The first detonated around 7 p.m. Comedy Central announced on Twitter that Jon Stewart, the longtime host of “The Daily Show,” will step downlater this year after more than 16 years running the show. Then, less than an hour later, the Brian Williams bomb dropped. NBC dispatched a letter saying it had suspended its lead anchor, who weathered days of intense scrutiny following his admission he had cooked up a personal tale of Iraq bravery, for six months. Without pay.

It wasn’t long before the murmurs started — through Twitter, throughFacebook, through the nether reaches of the Internet. They called for something that at first seemed totally insane but, as it sank in, began to make sense: Jon Stewart, now as much a newsman as a comedian, and Brian Williams, now as much a comedian as a newsman, should just switch chairs.

Let that marinate for a moment.

“Please raise your hand if you want Jon Stewart to replace Brian Williams at NBC?” wrote Steven Greenhouse of the New York Times. A Miami journalist then placed a fake Guardian story on Facebook under the headline, “Jon Stewart leaves The Daily Show to anchor NBC Nightly News following Brian Williams departure.” (Clicking on this link, however, led the reader to a Rick Astley video.) NPR’s Scott Simon had this to say: “I can’t be the first person to notice that Brian Williams & Jon Stewart both seem available in about 6 months.” Even @TheTweetOfGod, with his 1.8 million followers, got into the mix. Heoffered: “Jon Stewart leaving. Brian Williams looking for work. It’s almost TOO obvious, isn’t it.”

@TheTweetOfGod has a point. Here’s why: Despite his protestations to the contrary, Jon Stewart is not exclusively a comedian. His career has careened from procuring doobies in “Half Baked” to directing the substantive film, “Rosewater,” a sobering tale of a captured journalist in Iran. More and more, he has admitted he’s grown tired of comedy.

While promoting “Rosewater” last year, he told NPR that he loves his job as the host of “The Daily Show.” “That being said, I think there are moments when you realize that that’s not enough anymore, or maybe it’s time for some discomfort.” On Tuesday night he affirmed his restive spirit. “This show doesn’t deserve an even slightly restless host, and neither do you.”

Stewart has become as much a serious media man as anything else. (Remember, NBC reportedly offered him the plumb job of host of Meet the Press.) And most Americans agree. In 2008, Pew Research took a poll, asking which journalist they most admired. Stewart finished fourth. “Are Americans confused?” Pew asked in its release.

They weren’t. “The Daily Show closely resembles the news agenda of a number of cable news programs as well as talk radio,” Pew continued. “The program also makes heavy use of news footage, often in a documentary way that employs archival video to show contrast and contradiction, even if the purpose is satirical rather than reportorial.”

Another journalist finished right ahead of Stewart in the poll. It was Williams, who had already sat in NBC’s anchor chair for years, and was authoring a much quieter, but no less remarkable transition — the opposite of Stewart’s own. Williams was becoming a comedian.

“Brian Williams: The funniest guy in the room,” Esquire sang in 2005. “What do you do call a former fireman from Jersey with a surprisingly quirky wit and no college degree? Anchorman.” But this anchor had gifts of showmanship any other major anchor of the modern era. He could make ‘em laugh. This ability arguably brought more celebrity than even his best journalism.

User rating: 0.00% ( 0
votes )
8 Things You Need to Succeed When Working for Yourself Energy Storage Is Preventing Blackouts But Its High Cost Is Impeding Progress