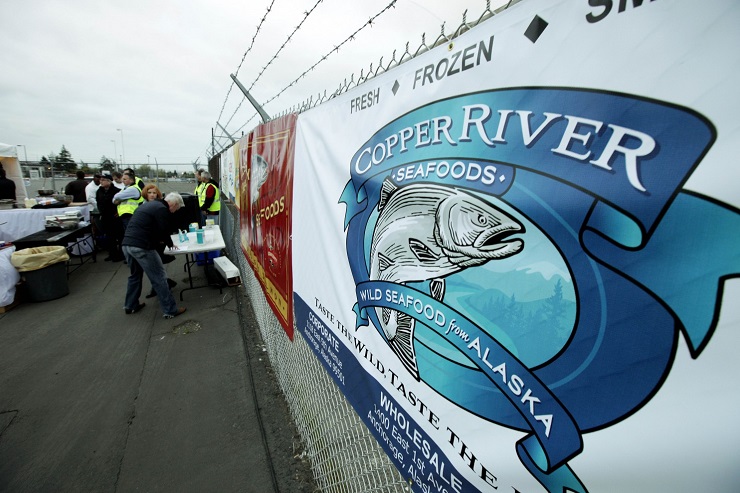 JUNEAU, Alaska — A growing number of restaurant customers and grocery store shoppers in the country are asking for Alaska’s Copper River sockeye salmon by name.

But the marketing effort that popularized the firm, red fish could be in jeopardy as the commercial fishermen who provide much of its funding decide whether to pull their support.

Ten years ago, the fleet of drift fishermen who hang nets from their boats to catch salmon in Prince William Sound voted to assess itself a 1 percent tax to fund Alaska’s first regional seafood development association.

The Copper River/Prince William Sound Marketing Association has since helped create brand-name recognition and raise the price of the region’s sockeye to the highest in the state.

But some drifters frustrated with the association’s rules and alleged lack of transparency are seeking to eliminate the tax, and they have forced a vote on the matter. Ballots were due in early March, and results are expected this weekend.

A smaller group of area setnet fishermen — those who let out nets from shore — later joined the association and have initiated a separate vote.

Association board members say without the drifters’ contribution — about $545,334 in 2014 — continuing their efforts will be impossible once current funding runs out. But those who support the vote say the board needs to reassess its operations.

Per Nolan is one of the fishermen who voted to create the organization. Now he supports the repeal.

Nolan, a former board member who’s fished in the region since 1978, said he would like to see the association continue but with more transparency and better program evaluations.

“Hopefully the board refocuses and realizes there is a portion of the members that feel they’re being underserved,” he said.

Nolan said that as a board member, he supported an effort to accept project proposals from outside the board, which gave members a chance to help direct the association’s work.

If the tax is repealed, the organization could operate on grants, or even vote to reinstitute the tax after restructuring, he said.

Smith has served on the board twice and both times been removed. His efforts to change the organization from within failed, and he wants the tax removed to instigate change.

But the board’s president, drift fisherman Jeff Bailey, said not all the concerns make sense. Members could have brought up changes to the bylaws without calling for a referendum on the tax, he said. The organization is audited regularly by law because it brings in more than $500,000 per year.

Efforts to market Copper River salmon started in the 1980s, and several groups have contributed over the years, said Thea Thomas, another drifter on the board.

The organization formed after the Legislature voted to allow regional marketing associations in 2004, at the recommendation of a task force convened to address a slump in salmon prices.

The association has focused heavily on branding in the Lower 48.

“What a lot of consumers didn’t know was that we fished Copper River sockeye all the way through the month of July,” Thomas said.

The organization does tours each year, which bring journalists, food bloggers and chefs from around the country to Prince William Sound. The visitors meet fishing families, eat salmon, go fishing and learn about the fishery’s sustainability, Thomas said.

Besides its marketing work, the association tries to improve fish quality, including encouraging fishermen to bleed and ice fish, which helps with taste and freshness.