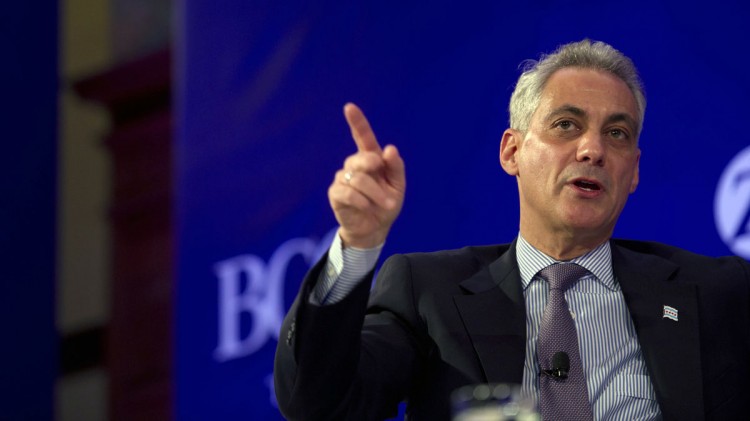 Wall Street is giving the Second City a second chance.

The price of Chicago’s most-actively traded bond has erased almost all of the decline that followed Moody’s Investors Service’s May 12 decision to cut the city to junk. Buyer confidence has been bolstered because banks aren’t seeking penalties related to the downgrade, anticipating Chicago would be able to sell $674 million of general obligations Wednesday to refinance debt. Underwriters lowered the yields on some bonds due to demand from investors.

“It sends the market a message that they are able to work through these difficulties,” Dan Heckman, senior fixed-income strategist at U.S. Bank Wealth Management, which oversees about $128 billion, said before the sale. “Sometimes you have to hit a low point before you bounce back.”

Wall Street’s support is helping Chicago avert a cash crunch as a $20 billion pension-fund shortfall leaves it with the lowest credit rating of any big U.S. city except Detroit. The loss of its investment-grade rank from Moody’s triggered provisions allowing banks to seek as much as $2.2 billion in accelerated debt payments or fees to break derivative contracts.
Such requirements helped push Jefferson County, Alabama, into bankruptcy when it was unable to refinance debt after the 2008 credit crisis.

Chicago moved to avoid that fate with its first bond offering since the Moody’s downgrade. The securities are still considered investment-grade by Standard & Poor’s, Fitch Ratings and Kroll Bond Rating Agency, the companies the city hired to rank the debt. The proceeds will pay off variable-rate bonds that exposed Chicago to the penalties.
The city of 2.7 million received $6 billion of orders from investors, nine times more than what was being sold, Chicago Chief Financial Officer Carole Brown said in a statement. The longest-dated bonds — those maturing in 2042 — yielded 5.84 percent, according to data compiled by Bloomberg. That’s down from 6 percent offered during the preliminary pricing, according to three people familiar with the sale, who requested anonymity because the deal wasn’t final.

Chicago’s deal size is down from an initial $806 million because it will tap credit lines for part of the refinancing, according to a person familiar with the offering.

“The market’s initial reaction was to throw Chicago in that same pot with Detroit and Puerto Rico,” said Gary Pollack, who manages $6 billion of munis as head of fixed-income trading at Deutsche Bank AG’s private-wealth management unit in New York. “People sort of reassessed Chicago and started to see the differences.”
Puerto Rico and Detroit were left teetering from declining populations and years of borrowing. That pushed Detroit into bankruptcy in July 2013, while Puerto Rico has been rushing to shore up its budget to avoid being locked out of the bond market.

Chicago is dealing with pensions that don’t have enough money to cover all the benefits that have been promised. The city is required to put an additional $600 million into the retirement system next year, which may spur Mayor Rahm Emanuel and the city council to raise property taxes or cut services. The options for reducing the pension-fund deficit were limited by a ruling from the Illinois Supreme Court this month, which said benefits are protected by the state constitution.

Investors said Wednesday’s sale will alleviate speculation that the city will be hit with penalties it can’t pay.
“After the deal, people might actually feel a little better about the whole situation, at least for a while,” John Miller, co-head of fixed income in Chicago at Nuveen Asset Management, which oversees about $100 billion in munis, said in an interview at Bloomberg’s New York headquarters ahead of the sale.
“Maybe the $2.2 billion implied that Chicago had a liquidity crisis of some sort,” he said. “The liquidity issue is going to abate.”