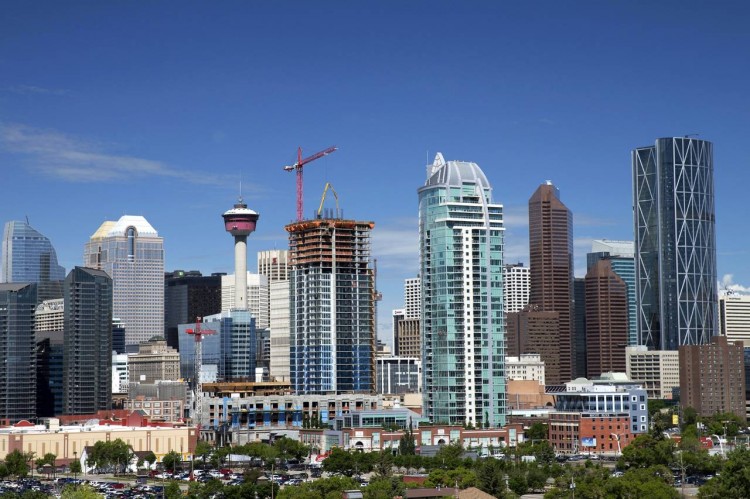 That was in the fall of 2013, amid a boom fueled by high oil prices that had the commercial real-estate market in Canada’s oil capital rivaling that of Houston. Space was in short supply, vacancy rates were in the low single digits, and rents commanded a premium. The groundbreaking on Brookfield Place came not long after Encana Corp.’s The Bow, a 58-story tower, opened in late 2012.

Today, slumping oil prices have pushed a record amount of unleased space downtown back onto the market even as construction of nine major office buildings is under way. Along with Brookfield Canada Office Properties, which plans to open the first tower of Brookfield Place in 2018, some of Canada’s other biggest real-estate developers are investing here. They include Oxford Properties Group, the real-estate arm of pension fund OMERS, Cadillac Fairview Corp., which is owned by Ontario Teachers’ Pension Plan, and insurance giant Manulife Financial Corp.

Calgary’s vacancy rate climbed to nearly 11% during the first quarter from 8.5% at the end of 2014—a shift that has pushed down rents, especially in the sublease sector. Now, some landlords are offering free rent or money for upgrades such as new carpet or furniture, marking a big change from just a few years ago when oil companies were clamoring for more space.

The glut of available space is expected to increase over the next 24 months as new and more modern office space enters the market. Cushman & Wakefield estimates that some four million square feet are under construction in the downtown core. It sees Calgary’s vacancy rate hitting a peak of 15.4% by the fourth quarter of 2016.

Many of the new office-tower developments were conceived when oil prices were about $100 a barrel. Some industry watchers say the market may avoid a protracted slump if oil prices stage a quick recovery. Currently, they are hovering around $60 a barrel.

Mayor Nenshi says the current market slump is creating opportunities to attract more foreign investment to his city. He plans to take that message to U.S. investors in early June when he visits New York.

“The current valuations may make some very cool plays there more possible,” he said.

Indeed, the crude-price swoon has prompted some investors to go bargain hunting. “We would see the downturn as an opportunity to make prudent acquisitions,” said Ted Willcocks, global head of asset management for Manulife Real Estate, the real-estate arm of Manulife Financial.

Manulife, Canada’s largest insurance company by assets, has less than 1 billion Canadian dollars ($812 million) invested in real estate in Alberta, mostly in premium office buildings. Late last year, it completed a series of real-estate acquisitions across Canada, including some industrial properties in Calgary.

Sun Life Financial Corp. is also watching developments in Calgary. Canada’s No. 3 insurer has about C$1.4 billion invested in real estate in Alberta, C$850 million of which is in Calgary. It is grappling with vacancy rates that are “slightly higher” than anticipated in recently completed industrial buildings in Calgary’s northeast, said Phil Gillin, senior managing director and portfolio manager of Canadian Property Investments at Sun Life Investment Management. The company has pushed pause on office-development sites in that part of the city.

“We are not proceeding with development at this point pending greater certainty in terms of the marketplace and tenant demand,” Mr. Gillen said.