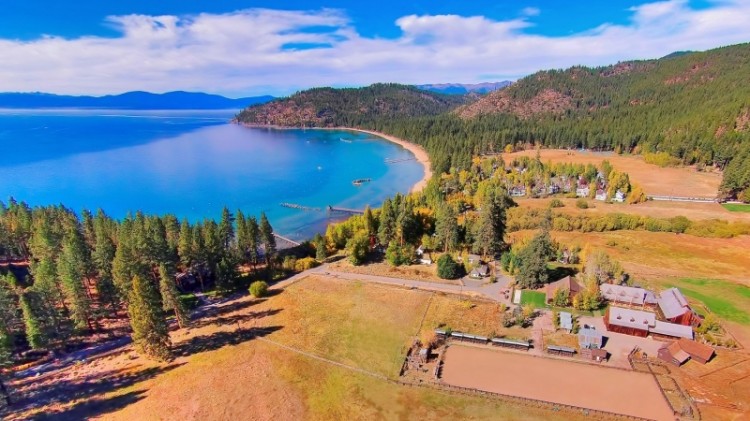 To be or not to be the new owner of Shakespeare Ranch, that is the question here. For those who like history, ranches, and Lake Tahoe, this property could be a dream come true.

This estate has much history– even though it has only had two owners since 1861. Its original name was Glenbrook, in homage to the property’s protected glen and the brook that flows through it.

Glenbrook’s first purpose lay in lumber: in the late 1800s, the property became the largest and most productive lumber operation in the Tahoe Basin. According to the official listing page, “When the mining rush in the Comstock ended around the turn of the century, the lumber and mill town gradually transitioned into a summer resort community…..[T]he first visitors to the area arrived by stagecoach and by steamer from the West Shore. In 1906, the Bliss family assembled the Glenbrook Inn which included buildings from the original Jellerson Hotel and Lakeshore House….. With railroad service from Truckee to Tahoe City and steamer service across the lake to Glenbrook, the Inn became the fashionable summer resort of affluent vacationers from around the country.”

In a process some three decades long, the new owner and his family purchased not only the Glenbrook Inn, but also myriad parcels surrounding it, fashioning a compound. The new name, Shakespeare Ranch, came from a specific feature of the property: a “towering rocky outcrop, Shakespeare Rock, where early settlers claimed they could see the cameo profile of the ‘Old Bard.’” Over the past 25 years, the current owners have worked to acquire and restore historic structures, working closely with architect Marc Appleton to protect the aesthetic of the original inn.

Not only maintaining the property but also its purpose, the current owners have revived many old traditions such as rodeos dating back to the 1940s and horse-drawn stagecoach rides. They’ve also introduced more modern diversions in the 5,000 square foot “barn” (originally built in 1873), such as live concerts and comedy (Robin Williams, Jay Leno, Lionel Richie, Kenny “Babyface” Edmonds, Kenny Loggins and the band America have performed), gourmet food (Emeril Lagasse has prepared meals here), golf and tennis.

Now, you could be the third owner of this grand lakeside ranch. Features to entice you:

Perhaps one of he more subtle, but very helpful features is the location itself. This land is on the Nevada side of Tahoe, so though just minutes from California by boat, offers Nevada tax benefits. But then, why would someone who can afford Shakespeare Ranch worry about taxes? The list price, after all, is $98M.

User rating: 0.00% ( 0
votes )
Moffat County facing fate of the changing West Five-alarm bargain in Gaithersburg is converted into a home