The last time Morgan Stanley made a mockery of Reg-S, was in February 2014 when a day before Tesla announced a $1.6 billion convertible offering Morgan Stanley’s Adam Jonas raised his PT on TSLA from $153 to $320, sending the stock soaring and assuring far less convertible dilution on the day of pricing. Fast forward 1.5 years when Tesla, having burned through most of this cash (in fact it burned over $1 billion in just the first 6 months of the year), Tesla announced it would sell $500 million in a follow-on stock offering (subsequently upsized).

We were modestly surprised that Adam Jonas did not upgrade the stock just before the equity offering as he did last time. We said the following:

And if there is a reason why Morgan Stanley did not upgrade the stock with a $320 price target yesterday as it did back in 2014 the day before it issued a convertible offering for TSLA, is that this time the lead left is Goldman, not MS: “Goldman, Sachs & Co. and Morgan Stanley are acting as lead joint book-running managers for the offering, J.P. Morgan and Deutsche Bank Securities are acting as additional book-running managers for the offering, and BofA Merrill Lynch and Wells Fargo.”

Moments ago, however, all our confusion was put to rest when Morgan Stanley did just as expected, only this time it at least followed protocol when it announced it is raising its price target on TSLA from $280 to a whopping $465, or just shy of $61 billion in implied market cap. Incidentally at this price TSLA would be the biggest US automaker, surpassing not only GM’s $50bn in market capo, but also Ford’s (F) $60 billion. 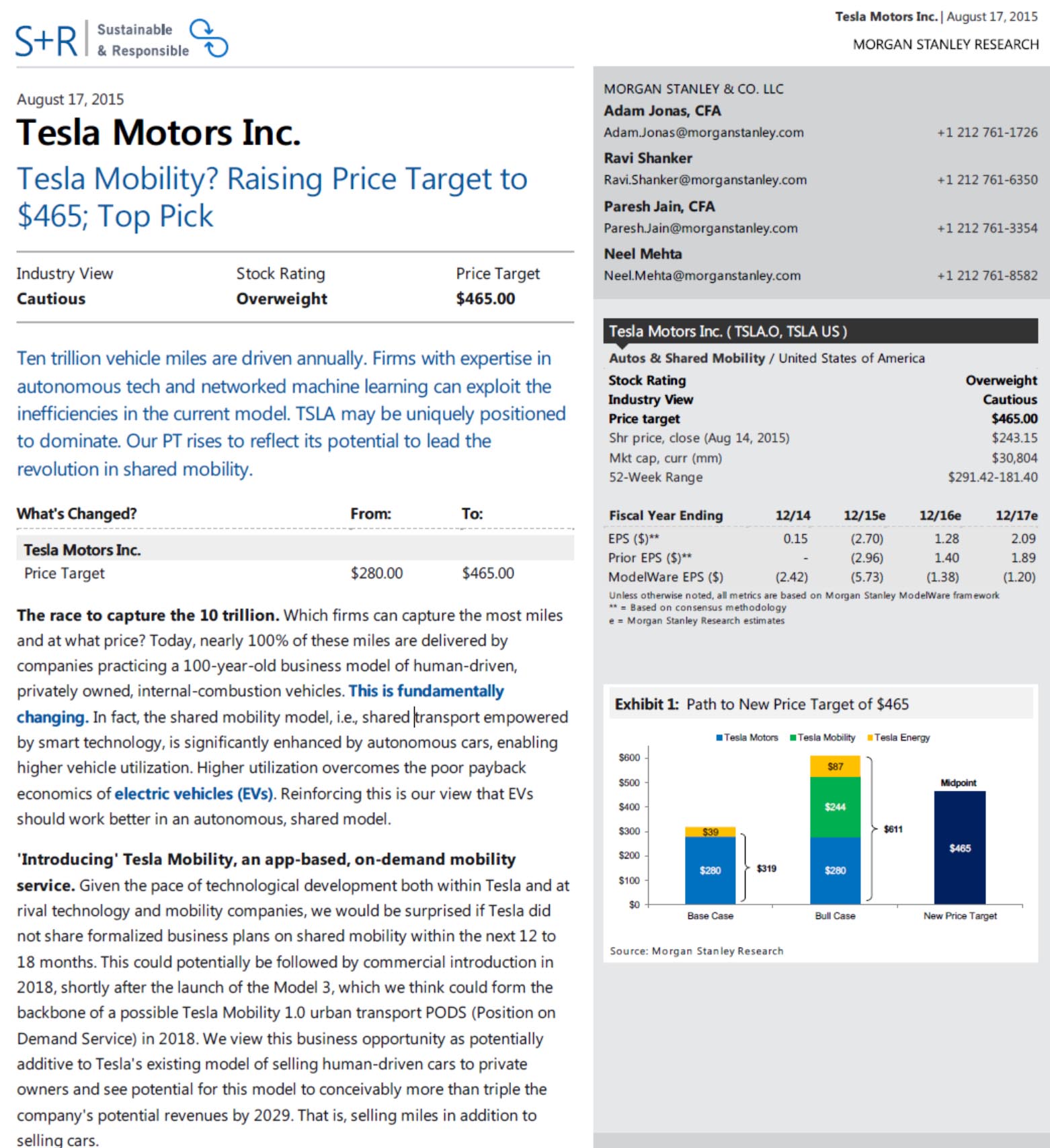 And just to make sure the joke’s not lost on anyone, Jonas decided to port over the traditionally exuberant Elon Mask hyperbole manifesting itself in the user of Greek-prefixes such as mega, giga and hyper, into his own report as follows:

Raising our Tesla price target to $465 from $280 to reflect the potential for Tesla to lead the revolution of the shared mobility public transportation hyper-structure and more confidence around the commercial viability of Tesla Energy. Our new price target of $465 represents the midpoint of our new base ($319) and bull case ($611) valuation to reflect our view that while a mobility app is likely to be announced within 12-18 months, there is a degree of uncertainty as to if, when and how this product unfolds.

User rating: 0.00% ( 0
votes )
Peter Merrigan | Taurus Bought The Townhomes of Beverly After This, Higher Education Will Never Be The Same Again