US Trade Deficit Plunges Most Since The Financial Crisis

May 03, 2018Jeremy ParkinsonUncategorizedComments Off on US Trade Deficit Plunges Most Since The Financial Crisis 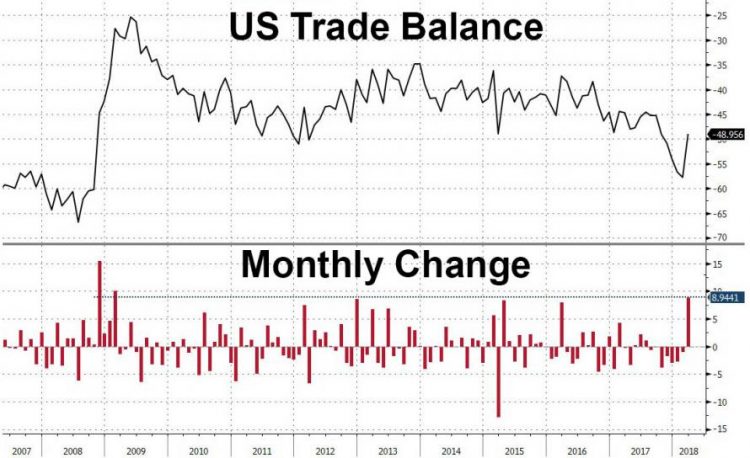 What a difference a month makes: just 30 days after the US posted the biggest trade deficit since the financial crisis, when the US trade balance was some $57.6BN against the US, moments ago the BEA reported that the US trade deficit plunged by a whopping $8.7 billion, dropping to $49BN, better than then $50BN expected, and the biggest monthly drop (in dollar terms) since the financial crisis.

According to the census bureau, the deficit decreased from a revised $57.7 billion in February to $49.0 billion in March, amid a perfect trade environment as exports rose and imports declined, or as Trump would say, “his policies to boost US trade worked.”

Also good news, if only for GDP bean-counters: imports declined, decreasing by$4.6 billion, or 1.8%, in March to $257.5 billion. Imports of goods decreased $3.7 billion and imports of services decreased $0.9 billion.

User rating: 0.00% ( 0
votes )
Tesla's Bizarre Conference Call: Musk Went After Analysts And His Own Execs Unilever Indonesia Has Averaged 130% ROE Over The Past Five Years