Crude struggles to preserve the rebound from earlier this week as Kuwait’s Oil Minister, Bakheet Al-Rashidi, argues that ‘it’s very early to talk about any cuts’ ahead of the Organization of the Petroleum Exporting Countries’ (OPEC) meeting on December 6, and the current environment is likely to keep oil prices under pressure as the Relative Strength Index (RSI) still sits in oversold territory. 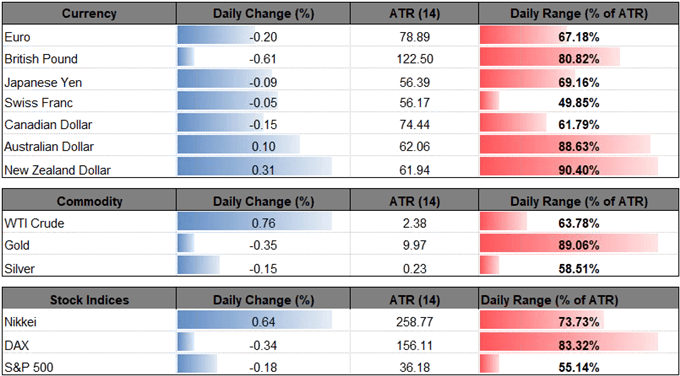 It remains to be seen if OPEC will continue to actively respond to falling oil prices as Saudi Arabia considers a more clandestine approach in balancing the energy market, but there appears to be growing speculation for a major announcement next month as the group sees slowing demand in 2019.

Keep in mind, the outlook for non-OPEC production remains mixed as updates from the U.S. Energy Information Administration (EIA) show field production holding steady at 11,700K b/d in the week ending November 16, and OPEC and its allies may try to avoid overemphasizing the recent volatility in oil prices as the group pledges to ‘read the market to see market stability.’ With that said, oil remains vulnerable ahead of the OPEC meeting as the group struggles to meet on common ground, and a further decline in crude prices may fuel a broader change in market behavior and the ongoing skew in retail interest. 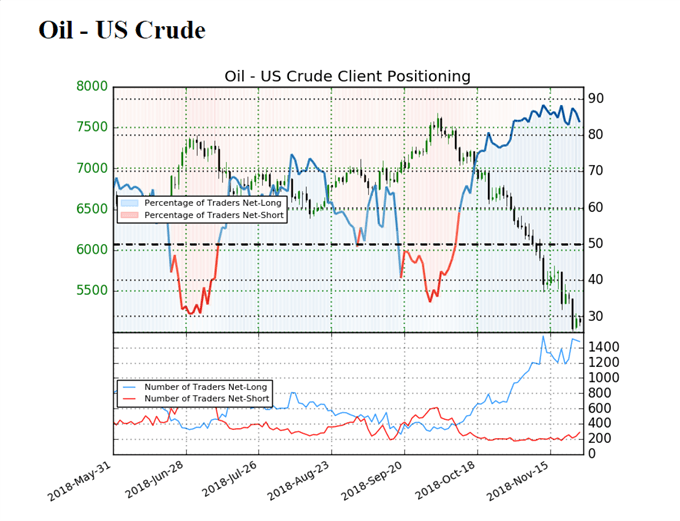 The IG Client Sentiment Report shows 83.5% of traders are still net-long crude compared to 83.7% last week, with the ratio of traders long to short at 5.07 to 1. In fact, traders have been net-long since October 11 when oil traded near the $71.00 mark even though price has moved31.2% lower since then. The number of traders net-long is 8.3% lower than yesterday and 22.2% higher from last week, while the number of traders net-short is 32.9% higher than yesterday and 15.5% higher from last week.

User rating: 0.00% ( 0
votes )
Gold: Tax Loss Season Or A Bull Era? The Dangerous Game Both Powell And Trump Are Playing