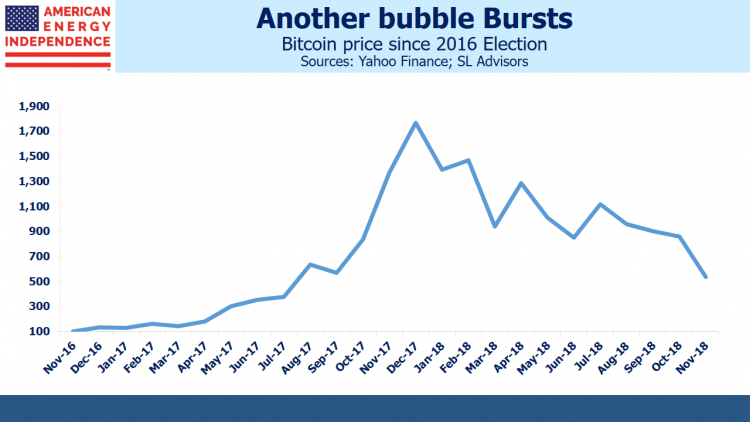 Nothing exemplifies intangible value, or more accurately ephemeral value, better than Bitcoin. The great Risk On trade began the day of Trump’s election victory, when an overnight market swoon quickly reversed. Bitcoin buyers embraced the new mood more exuberantly than most, running the price briefly as high as $20,000 by last December, from $730 at the time of the election. 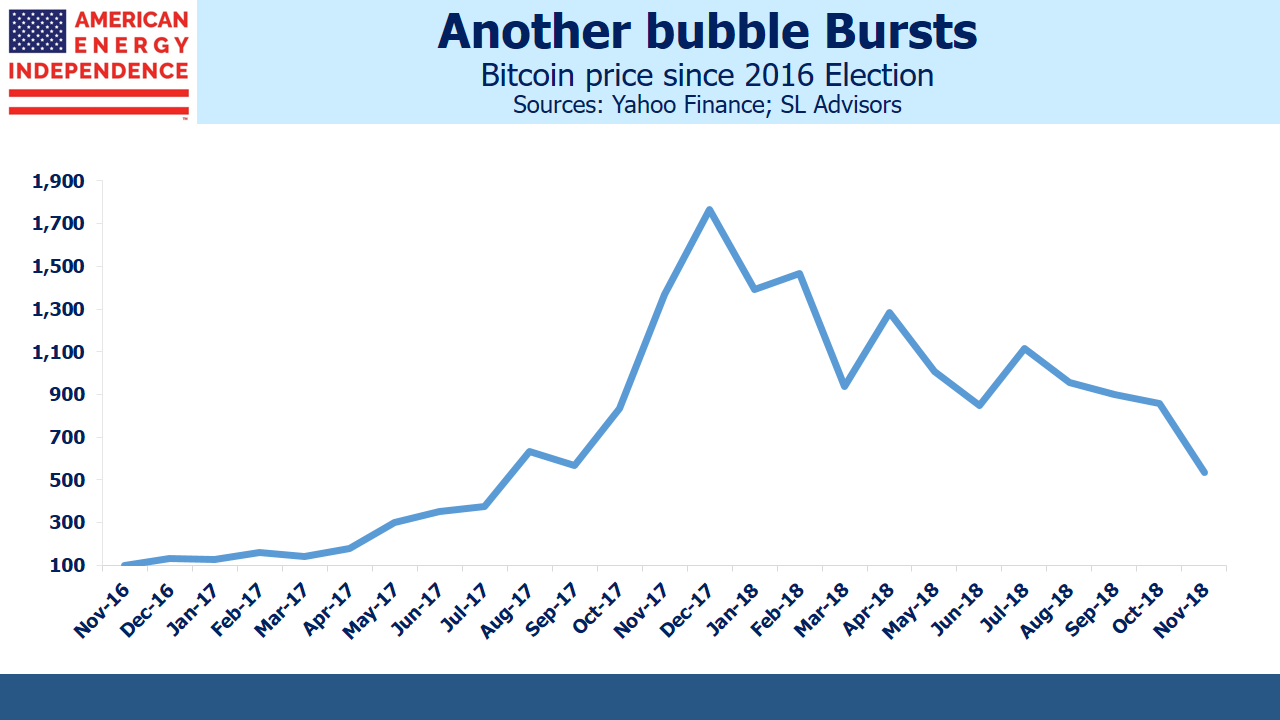 As a currency, Bitcoin has spectacularly failed the “store of value” test. Its proponents assert that freedom from government oversight ensures its value cannot be manipulated for political purposes. It’s similar to the argument made by gold investors, although fiat money (what followed when Nixon suspended convertibility of the US$ into gold in 1971) has done pretty well. Bitcoin is a solution in search of a problem. Among the many risks that Bitcoin investors face is that their exchange is hacked, with scant protection from the governments whose protections they skirt.

Bitcoin has now lost 80% of its peak December 2017 value. Wherever speculators take it from here, the case for a new currency free of government control and protected by no-one is lost.

By contrast, low volatility stocks, possessed of more tangible value than Bitcoin, are enjoying a resurgence. The rapid exit from momentum that Bitcoin previewed a year ago is rippling across equity markets (see FANG Goes Bang). The beneficiaries include consumer staples, such as Clorox (CLX), Kimberly-Clark (KMB), McCormick (MKC) and Procter & Gamble (PG). The sector was boring when CNBC was debating the relative merits of FANG stocks Facebook (FB), Amazon (AMZN), Netflix (NFLX), and Google (GOOG), but earnings stability can be attractive too.  The S&P Consumer Staples Index has a beta of 0.69 and dividend yield of 2.75%, whereas the FANG stocks have an average beta of 1.47 and pay no dividends.

User rating: 0.00% ( 0
votes )
3 Reasons EUR/USD Why Is Plunging Towards The Yearly Lows E Crude Oil Ending A Bigger Impulse; Be Aware Of A Bullish Reversal!