An energy crisis and civil unrest threaten the viability of Bitcoin mining in Kazakhstan, just months after the country became the second-biggest producer of the world’s top cryptocurrency.
Kazakh Bitcoin Miners Face Trouble
Kazakhstan’s Bitcoin boom looks like it could be short-lived.
Throughout the final months of 2021, the central Asian country has struggled to keep electricity flowing after a rapid increase in demand from Bitcoin mining operations. Over the winter months, Kazakhstan has faced rolling blackouts, prompting the country’s national grid operator, KEGOC, to ration power to mining facilities during peak usage hours.
Although Kazakhstan previously welcomed Bitcoin miners fleeing increased regulatory oversight (and an eventual blanket ban) in China, very few of them are registered with the government, which has in turn contributed to the country’s electricity supply issues. Kazakh officials report that these so-called “gray miners” consume an estimated 1,200 megawatts of electricity and have brought Kazakhstan’s power grid to a breaking point. According to the Cambridge Bitcoin Electricity Consumption Index data, Kazakhstan currently hosts 18.1% of the entire Bitcoin network hash rate.

The unstable electricity grid, coupled with pandemic-related inflation and rising fuel prices, led to protests erupting over the weekend in Almaty, Kazakhstan’s largest city. The unrest reached a fever pitch Tuesday, turning violent as riot police deployed tear gas and stun grenades to quell protests. By Wednesday morning, Kazakh President Kassym-Jomart Tokayev had stripped his predecessor, Nursultan Nazarbayev, of his role as head of the country’s security council in an attempt to put an end to protests, but to no avail.
In response to the civil unrest, the Kazakh government has started limiting Internet connectivity. According to Internet watchdog NetBlocks, the country is now in the midst of a nationwide Internet blackout after a day of mobile Internet disruptions and partial restrictions. The downtime is likely to impact mining operations more severely than power rationing. Without access to the Internet, mining machines cannot run as opposed to running at a limited capacity under power rationing. While the Internet blackout only commenced early Wednesday, it could have a major impact on mining operations in the country if it persists.
Mining firms currently based in Kazakhstan include BIT Mining, which runs several sites across the country. Canaan, the Nasdaq-listed company behind the ubiquitous ASIC mining rig, also announced plans to expand its operation in the country this week. 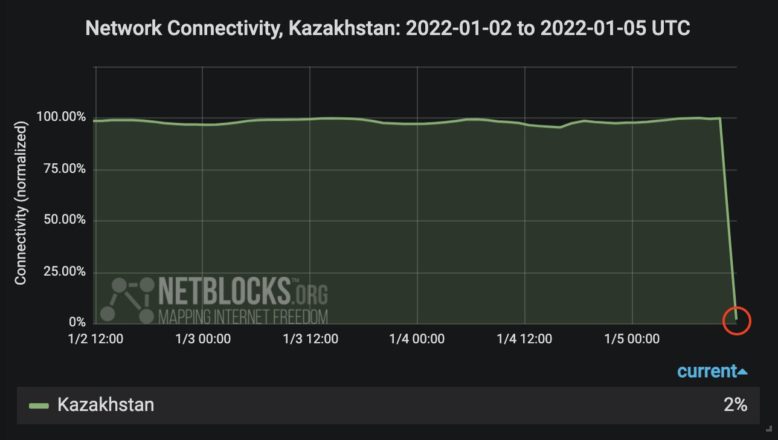 Network connectivity in Kazakhstan. Source: NetBlocks
Prior to the recent blackouts, the ongoing electricity crisis had already started to take its toll on Bitcoin miners. One Kazakh-based mining company, Xive, was forced to shut down over 2,500 mining machines in November due to the energy crunch. The company’s co-founder, Didar Bekbau, tweeted out that Xive is looking to relocate to the U.S, calling a potential move his “American dream.” On Dec. 2, BitFuFu, a hash rate standardization platform backed by Bitmain, announced it would be abandoning its mining machines in Kazakhstan to buy a new array in the U.S due to the electricity rationing.

If more Kazakh miners follow Xive and BitFuFu, the country could see an exodus similar to the one experienced during China’s crypto crackdowns last summer. As Chinese authorities systematically shut down mining operations throughout the country, the Bitcoin total network hash rate plummeted, bottoming out at a 52% drop from its all-time high in late June. 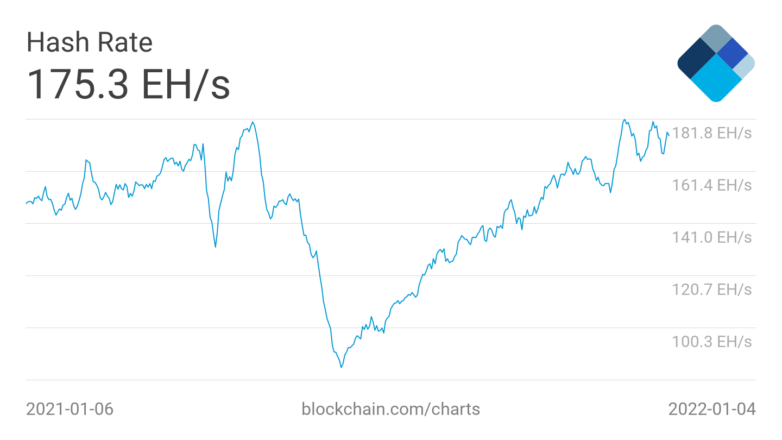 Bitcoin network hash rate. Source: blockchain.com
Before China’s crackdown, the country accounted for around 34% of Bitcoin’s hash rate. While Kazakhstan’s 18% going offline is unlikely to cause a drop of similar magnitude to when miners left China, it still stands to reduce the total network hash rate significantly in the short-term.
As Bitcoin miners face trouble worldwide, the U.S is accounting for a higher percentage of cryptocurrency production globally. After overtaking China in October last year, the U.S. now hosts 35.4% of all active Bitcoin mining machines. If Kazakhstan’s energy crisis and civil unrest continue, America could be set to attract an even bigger slice of the Bitcoin network in the future.
Disclosure: At the time of writing this feature, the author owned ETH and several other cryptocurrencies.

User rating: 0.00% ( 0
votes )
What Is NEAR Protocol? The Sharded Layer 1 Blockchain Explained Our Crypto Predictions for 2022