May 24, 2022Jeremy ParkinsonCryptocurrency, No picture0

Crypto Briefing talks with Bright Star Studios founder and CEO Mark Laursen about the studio’s upcoming massively multiplayer online role-playing game, Ember Sword.
What Is Ember Sword?
Ember Sword is hoping to become the first Web3 MMORPG.
Developed by the Danish company Bright Star Studios, the game describes itself as an open-world sandbox role-playing game inspired by MMO giants like World of Warcraft, Runescape, and Guild Wars.
Ember Sword places an emphasis on accessibility, focusing on removing barriers to entry for new players and MMO veterans alike. There are no specific classes, as is common in other role-playing games. Instead, Ember Sword lets players experience everything the game has to offer, such as leveling up skills, crafting, and combat, all through a single character.
Ember Sword is set in a fantasy universe called Thanabus. It’s made up of four distinct nations: Duskeron, Ediseau, Sevrend, and Solarwood. The nations are broken up into three territories: Kingship, Outlaw, and Wilderness, each offering unique game objectives, from player versus player combat to epic open-world boss fights.
Ember Sword will also leverage blockchain technology to facilitate community involvement and give players ownership of their in-game items. Ember Sword land plots will be tokenized as NFTs on Polygon, along with various cosmetic and vanity items that players can use to customize their characters and decorate their plots.
Crypto Briefing recently sat down with Bright Star Studios founder and CEO Mark Laursen to talk about how Ember Sword plans to improve on existing MMORPGs, nurture the social aspect of role-playing games, and use NFTs and blockchain technology to enhance the player experience.
Improving the MMO Experience
Unlike many existing MMORPGs that operate using a pay-to-play subscription model, Ember Sword will launch as a free-to-play game. Bright Star will generate revenue by taking a commission from Ember Sword NFT sales, meaning that the company’s success is tied to the game’s success.
To ensure Ember Sword flourishes, Laursen has drawn from his vast experience in the gaming world to address pain points in existing MMO games. One of the most important aspects of MMORPGs is the social experience they offer. Role-playing games give players an escape to a fantasy world to slay dragons and demons, but they also offer the chance to work cooperatively with other players and forge new friendships along the way.

To help Ember Sword players interact with one another, the designers have created a single expansive world that everyone participates in at the same time rather than using multiple “servers” of the same game that each host a limited number of players. Ember Sword land (Source: Ember Sword)
“We want it all to be one big world that’s connected,” Laursen asserted. “It can get lonely—even in an MMORPG—which is kind of weird, you know, because it’s supposed to be with a lot of other people. So we want to nurture the whole social experience and everything that comes with it, something we think has been lacking in other games.”
To help achieve Ember Sword’s social vision, Bright Star is using a proprietary artificial intelligence engine to encourage player interaction. The AI will introduce dynamic difficulty depending on a player’s skill level, suggest routes and objectives that allow players to cross paths and work together, and make suggestions tailored to the player’s style. In addition to promoting cooperation, the AI can also help players find and attack each other in player versus player scenarios, facilitating even more interaction and bringing the Ember Sword world to life.
Ember Sword also aims to improve on existing MMO games by making it easier for new players to join in. Bright Star has created its own in-house game engine to run Ember Sword, allowing for fast, browser-based gameplay without the need to download a specialized client or load huge amounts of data before being able to play. “We’ve made it easy to jump in, do something cool, then sign up after if you want,” Laursen explained.
NFTs in Ember Sword
Ember Sword NFTs will take two main forms: land and cosmetics.
Last year, Bright Star sold 40,000 Ember Sword land NFTs on the Ethereum scaling solution Polygon for a total of $204 million. The plots came in five different types: land, settlement, city, town, and capital.
Regular land plots give owners the Sir/Lady title and are set to contain features such as campsites, NPC houses, resource deposits, and monster spawns that will be unveiled as the game world unfolds. However, settlements, towns, and cities will allow owners to build structures that other players in the game can use. Additionally, towns and cities will exclusively support exchanges, offering players the chance to buy and sell cosmetic NFTs and other in-game items.
When trades take place on exchanges, a small fee will be split 50/50 between the landowner and Bright Star, allowing players to earn passively from their land plots. Additionally, regardless of type, all land plots will receive a portion of the revenue generated by the areas around them. “The philosophy is that half of what goes in goes out into the community,” Laursen explained while highlighting how the player-owned nature of towns and cities helps them become dynamic, ever-changing hubs instead of the static settlements found in other games.
Ember Sword will also feature tokenized cosmetic items. While these NFTs won’t give players any material advantage in the game, they can be used to modify the appearance of player characters or land plots in the game. The plans for cosmetic item customization in Ember Sword are vast—even details such as building textures and ambient sounds for player-owned land will be represented by NFTs that players can collect and trade. 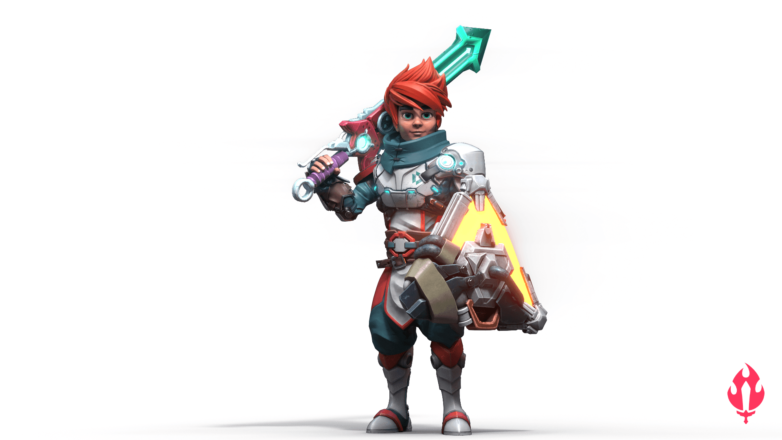 An Ember Sword character (Source: Ember Sword)
Most cosmetic NFT items will be released through in-game events and updates in batches. As such, the players will set item prices organically rather than Bright Star dictating how much certain items are worth. Those wanting to purchase cosmetic Ember Sword NFTs will also need to use the game’s upcoming EMBER token for purchases, similar to how Yuga Labs recently launched ApeCoin as the exclusive currency for its own Metaverse ecosystem.
However, Laursen made it clear that NFTs in Ember Sword will not make the game “pay-to-win.” “You can’t buy power in the game—you can only buy looks and cosmetics and vanity, all that stuff,” he stated. Generic items such as in-game gold, armor, and weapons will not be NFTs, and the game will be structured so that any attempts to farm items to sell to other players for real-world currencies will not be worthwhile. “If you’re just farming gold and selling it, you’re kind of doing yourself a disservice because there’s not really stuff that you need to buy. It’s the NFTs that you want, and you can’t bot farm those—you have to actually be good at the game and go out and play it,” Laursen explained.
Currently, all Ember Sword NFTs are hosted on Polygon and can be bought and sold on NFT trading venues like OpenSea. However, Bright Star plans to migrate Ember Sword’s land NFTs to Immutable X, an Ethereum Layer 2 scaling solution powered by StarkWare’s ZK-Rollup technology.
Bright Star decided to use Immutable’s NFT tooling to streamline the process of creating in-game NFTs and deploying the contracts on Layer 2. By doing so, NFTs stored on Ethereum Layer 2 will be able to connect with Ember Sword while benefiting from negligible transaction fees and near-instant transaction finality. When the game fully launches, all future land and cosmetic NFTs will be deployed using Immutable X and will be tradable on Immutable’s NFT marketplace.
Preparing for Launch
Currently, those who participated in last year’s Ember Sword land sale and hold either an Ember Sword land NFT or an Ember Sword badge have access to test the pre-alpha version of the game. Laursen revealed that the next big update to the pre-alpha version will be the introduction of combat, which will work similarly to popular battle area games such as Dota 2 and League of Legends. When asked about the long development timeline, Laursen hinted that Bright Star would release a more substantial version of the game by the end of the year, but he refused to make any promises. “Either way we’re looking to put out the full game by around the end of 2023,” he said.
Elsewhere, Bright Star is in the process of onboarding new talent to its growing team to speed up development. “We’re adding a lot of really high star talent that I’m sure will shock everyone. They’re people who are actually changing to our startup from huge companies and taking pay cuts because they believe in our vision,” Laursen said.
While Ember Sword is still over a year away from fully launching, the team behind it has a big vision for the game. If Ember Sword succeeds, Bright Star may become one of the first companies to incorporate blockchain technology into a game that’s free and accessible to all. In the meantime, Ember Sword NFT holders will have to wait for the official release to see if it lives up to its promise.
Disclosure: At the time of writing this feature, the author owned ETH, IMX, and several other cryptocurrencies.

User rating: 0.00% ( 0
votes )
DeFi Project Spotlight: Frax Finance, a Sweet Spot for Stablecoins A Week of Terra: the Story of Do Kwon and His Black Swan Wipeout