Solana Breakpoint 2022: Fun and Games in Lisbon as Winter Abides

Solana has faced many challenges this year, but Breakpoint’s Games Day showed that the Solana GameFi ecosystem has huge potential.
Solana’s Rocky Year
If last year’s Breakpoint conference was an all-out celebration that landed as SOL soared to staggering highs, this year’s event felt a lot more subdued. Landing in the midst of crypto winter, price talk barely surfaced across the weekend. Instead, the focus at Breakpoint was on building. Talks at the Lisbon event showed that Solana is looking ahead and shipping despite adverse market conditions.
Innovations like Metaplex’s Compressed NFTs and Saga phone highlight Solana’s efforts to become the most commercially viable option for scalable consumer-facing products, and they were showcased at Breakpoint.
While Solana has had many big updates focused on ushering in mass adoption this year, repeated network downtimes have shaken developer and investor confidence in the ecosystem. Questions over Solana’s stability ramped up last year after the Layer 1 network suffered an 18-hour outage, though SOL shook off the concerns and went on to rally to new highs with the rest of the market a few weeks later. In 2021, it was easier to defend Solana’s downtimes as an unfortunate byproduct of rapid adoption, but the network hasn’t yet proven its resilience.
Outages have added up throughout this year, prompting concern, mockery, and outrage across the industry. Solana lost interest from a number of teams operating in different pockets of the industry from DeFi to GameFi. Founders chose alternative networks to build their projects on as they did not want to risk leaving their users stranded for hours on end during an unexpected outage.
Solana has also faced several costly attacks. More than $320 million was stolen from the Wormhole bridge, a cross-chain solution used to connect Solana to Ethereum, in February, and last month the Solana DeFi project Mango Markets lost more than $100 million in an on-chain oracle exploit. Events such as this have taken some of the shine off of Solana’s ecosystem, raising questions about the security and scalability premise behind Solana’s vision.
Solana DeFi Takes a Hit, But Building Continues
Solana’s decentralized finance ecosystem took a hit as the market trended down in 2022. The total value locked has shown a huge reversal in dollar terms, plummeting from over $10 billion in November 2021 to $889.66 million today. This is due to a combination of SOL tanking (currently 88% short of its all-time high) and protocol outflows.

The total value locked in Solana DeFi (Source: Defi Llama)
Still, a bear can’t scare a community that is accustomed to “chewing glass”. Solana’s Hacker Houses have been springing up across the globe, inspiring copy-cat initiatives from a number of competing ecosystems.
Despite the challenges the market has presented, Solana has demonstrated fortitude and the community has shown heart, allowing the ecosystem to persevere through adverse conditions.

The Hunter Becomes the Hunted
In the 2021 bull run, Solana was the leading “Ethereum Killer.” Neon Labs raised $40 million to bring EVM compatibility to Solana, and the network was starting to take aim at EVM ecosystems. But today, Neon Labs has been relegated to the sidelines while new blockchain ecosystems are starting to target Solana developers.
Aptos and Sui have made huge splashes this year, with both of the Layer 1 projects raising nine-figure sums to fund development. Curiously, they received investment from a number of core Solana investors like FTX Ventures. Aptos and Sui were both developed by former Meta engineers, and it’s become an open secret in crypto circles that they are hoping to lure developers away from Solana.
In fact, the Sui Hacker House was located a stone’s throw from Solana’s in Lisbon. Interestingly, there were developers working on Solana projects in the Sui Hacker House because it offered a better WiFi connection—a metaphor for the difficult year the Solana ecosystem has faced.
However, as always, Solana continues to build. The blockchain has supported Move, the programming language Aptos uses, since 2019, and given its history of overcoming adversity, it could incorporate Move developers under its umbrella.
After all, Aptos’ rocky launch demonstrated that there is a big difference between fanfare, fundraising, and operating on mainnet. Solana has been delivering for years, and despite a difficult year, it remains one of the leading ecosystems in the space.
Solana’s Games Day Shows a Way Forward
Solana wants to become a scalable, cheap, and secure solution for mass usage, and it’s hard to imagine a more suitable market for that than gaming. There are nearly 3 billion gamers worldwide that could be onboarded to Web3, and the battle for their attention is just beginning.
The rise and fall of Axie Infinity and the play-to-earn movement it pioneered has ignited a gaming boom on several major blockchains. However, developers and ecosystem leads have now turned their attention to launching fun games that can capture the imagination (and capital) of traditional gamers.
However, traditional gamers have shown vocal opposition to crypto, causing major AAA studios to take a step back. Many crypto game development shops and publishers are now avoiding the traditional gaming convention circuit. Traditional game events now showcase very few Web3 games.
This made Solana’s Games Day feel special. Dozens of teams showcased their games and solicited feedback in a direct way. Solana already boasts the number two NFT ecosystem after Ethereum, but this event showed that Solana is serious about gaming as a featured sector. 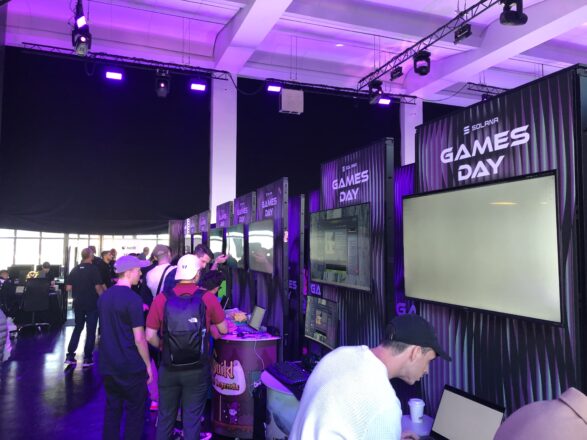 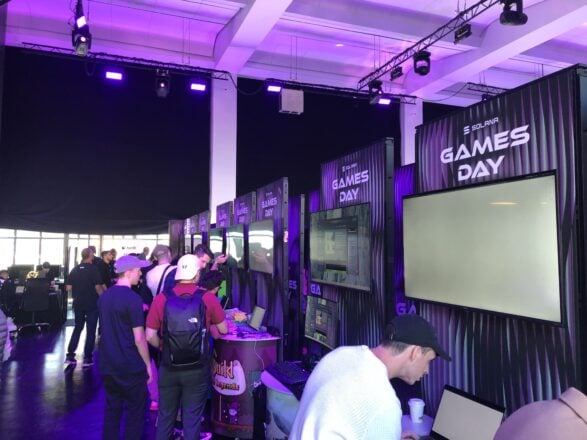 On the ground at Solana Games Day (Photo: Ilya Abugov)
Star Atlas unveiled its playable demo and Foundation Software Development Kit. Anticipation for the Solana-based game is huge in the gaming world, and it’s encouraging to see the team’s progress. Moreover, the SDK should make it easier for Solana to onboard teams looking to develop high-end games.
Game studios exploring blockchain are looking for fast, cheap, and stable technology, but they are also looking for business support. They need help with breaking the barriers between traditional gaming and Web3, communicating their vision, and simply getting out there.
While the blockchain itself is being improved, the Saga phone has offered mobile teams hope of a distribution channel outside of traditional app stores. This is especially important now in the face of the new Apple rules pertaining to NFTs. Moreover, middleware and launchers are now available in the Solana ecosystem that make Web3 integration and game discovery simpler for traditional game developers.
Solana has shown real vision in dedicating an entire day to showcasing its games, and it’s clear that the network is committed to the gaming vertical.
A Brighter Future
While Solana has had a challenging year, it was encouraging to see the ecosystem pull together and showcase its recent accomplishments at Breakpoint. Developers haven’t stopped building, and Solana remains determined to onboard crypto’s first 1 billion users. While Solana DeFi has taken a step back, the Layer 1 network’s gaming sector is beginning to flourish. If all goes well, Solana should have an exciting 2023 to look forward to.
Disclaimer: This commentary is not investment advice. It does not purport to include any recommendation as to any particular investment, transaction or investment strategy, or any recommendation to buy or sell any investment. It does not reflect any attempt to effect any transactions or render any investment advice.
This post is solely for informational and entertainment purposes. It is inherently limited and does not purport to be a complete discussion of the issues presented or the risks involved. Readers should seek their own independent legal, tax, accounting, and investment advice from professional advisors. The views reflected in this commentary are subject to change at any time without notice.
The authors or their affiliates may have ownership or other economic interests or intend to have interests in several of the organizations and crypto assets discussed, including SOL and ETH, as well as other crypto assets not referenced.

User rating: 0.00% ( 0
votes )
Privacy Is a Gradient: An Interview With Zcash’s Josh Swihart Aptos Airdrop Season Is Coming. Here’s How You Can Profit