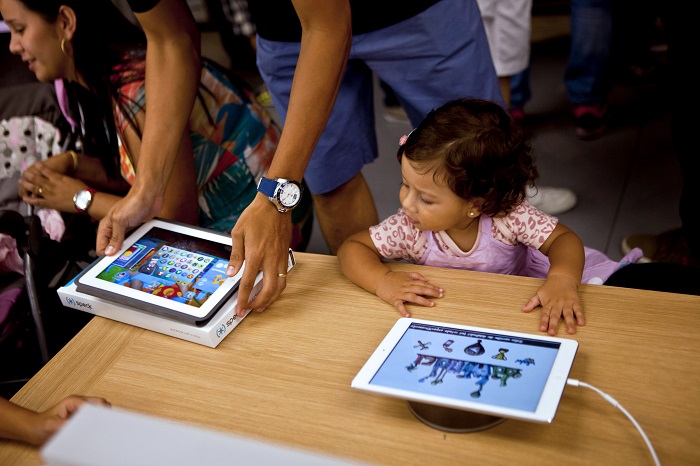 Apple Inc. (AAPL)’s suppliers have started manufacturing new iPads, according to people with knowledge of the matter, as the company works to reinvigorate sales of the tablet computers after two straight quarters of declines.

Mass production of a full-sized iPad with a 9.7-inch screen is already under way, with an unveiling projected for the end of this quarter or early next, said two of the people, who asked not to be identified because the details aren’t public. A new version of the 7.9-inch iPad mini is also entering production and will probably be available by the end of the year, they said.

The timing is crucial as Apple readies a new product push for the lucrative end-of-year holiday shopping season. The lineup is anticipated to include new iPhones with bigger screens, as well as a health-oriented watch-like device, people with knowledge of the matter have said. The Cupertino, California-based company is holding an event on Sept. 9 to debut the new iPhones, people familiar with the situation have said. Chief Executive Officer Tim Cook last month said Apple has an “incredible pipeline” that “we can’t wait to show you.”

The shares of Apple were little changed at $95.97 at the close in New York. The stock has gained 20 percent this year.

Apple needs to boost its iPad business, which is its second-biggest product category after iPhones. For Apple’s fiscal third quarter ended June 28, iPad sales slipped to 13.3 million units. Last month while discussing a new Apple partnership with International Business Machines Corp., Cook made it clear that part of the rationale for the pact was to sell to corporations so they could “be a catalyst for future iPad growth.”

“The one weak spot for Apple has been the tablet market,” said Amit Daryanani, an analyst with RBC Capital Markets, who rates the stock the equivalent of a buy. While the fastest growth days for tablet sales are probably in the past, “a refresh could stabilize the iPad’s revenue and profitability contribution to the company,” he said.

Output of the larger iPad may be restricted by manufacturing complications related to the use of a new anti-reflection coating, which Apple plans to add to the device to make the display easier to read, said one of the people.