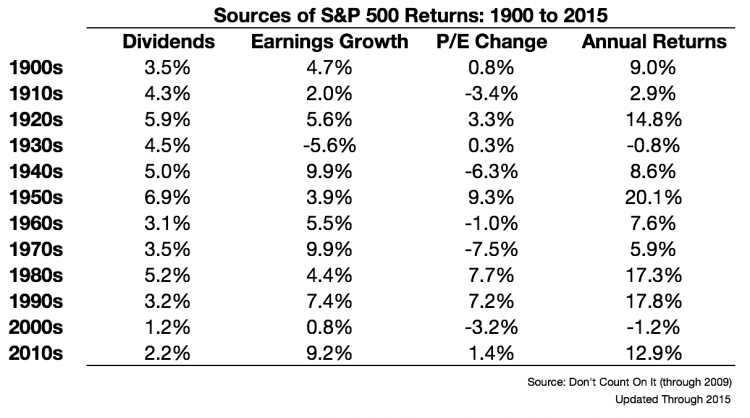 Vangaurd’s John Bogle has a simple formula for estimating future stock market returns which he has been using for 25 years and it’s worked the whole 25 years almost perfectly: Future Market Returns = Dividend Yield + Earnings Growth +/- Change in P/E Ratio. He says this formula currently gives him an estimate of stock market returns in the 4-6% range, well below the long-term average that falls in the 8-10% range. You could quibble with some of the details here but I like the fact that this is such a simple model.

Bogle has actually outlined this one before on many occasions. In his book Don’t Count On It he even provided a long-term look at how this formula has played out by decade going all the way back to 1900. Here’s the data (with an update by me through the end of 2015): 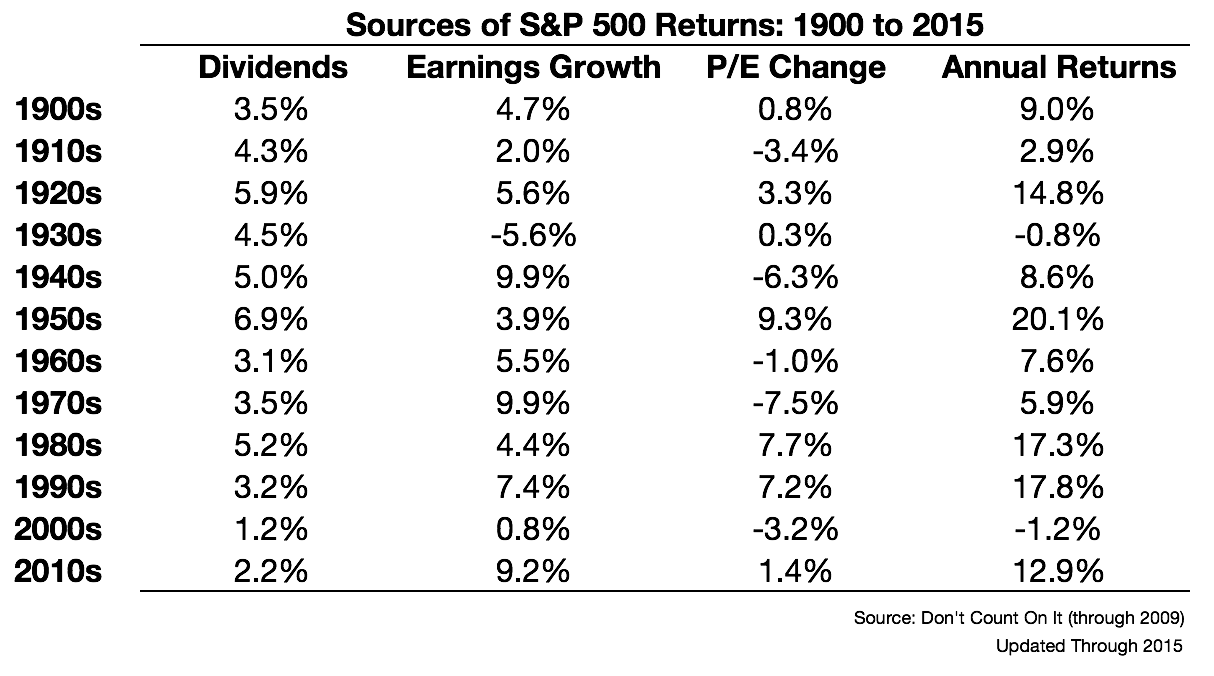 Dividend yields are much lower now than they were in the past (something that can be partially explained away by the increase in share buybacks) while earnings growth and the P/E multiple expansion or contraction have been somewhat more volatile.

What’s interesting here is how inconsistent the change in P/E has been decade-to-decade. At times high earnings growth has led to multiple expansion while other times it led to a contraction in the multiple people were willing to pay for earnings. Fundamentals matter over the very long-term but even over decade-long stretches investor sentiment can trump all, and the reason for this is because the P/E change is really a gauge of investor sentiment or emotions. When investors are feeling good they are willing to pay a higher multiple of earnings for stocks. When they are feeling nervous they are willing to pay a lower multiple of earnings for stocks. The problem with trying to forecast stock returns is that you’re really trying to guess how people will feel in the future.

You could come up with a reasonable approximation of the impact of dividends and earnings growth over the coming decade and still be way off depending investor allocation preferences or where we’re at in the emotional phase of the cycle, and Bogle said as much in his interview. He admitted, “I can’t forecast the future, let’s be honest about that, but I can make judgments using reasonable expectations about the future and it seems to me the handwriting is on the wall for lower returns than we’ve had historically” and that’s all you can really hope for as an investor when dealing with an uncertain future.

User rating: 0.00% ( 0
votes )
Weekly Unemployment Claims: Up 1K From Last Week, Better Than Forecast I'm Not Worried About This Round Of Oil Price Volatility