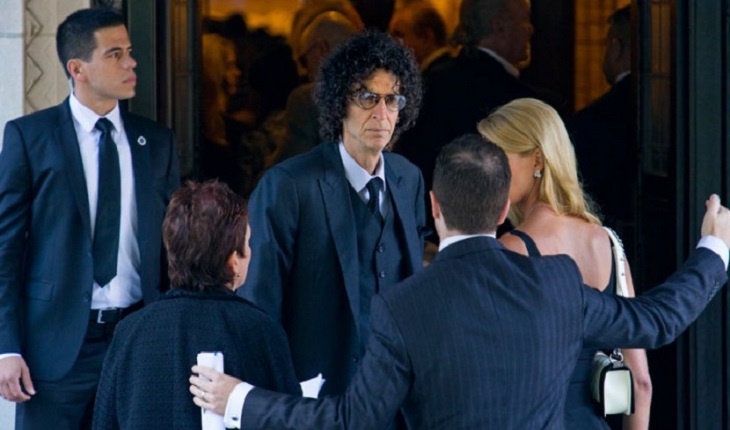 (Reuters) – Family and friends bid farewell on Sunday to Joan Rivers, the outspoken comedian who became famous around the world for her acerbic wit and brash style, at a private funeral sprinkled with jokes, laughter and songs.

Journalists Barbara Walters and Diane Sawyer, comedian Whoopi Goldberg, tycoon Donald Trump, actress Sarah Jessica Parker and comedian Kathy Griffin were among the celebrities who attended the service at Temple Emanu-El, a landmark synagogue on New York’s Fifth Avenue where Rivers, 81, was a member of the congregation.

Comedian Jeffrey Ross described it as “somber but funny” with plenty of hearty laughs from Rivers’ friends.

“Nothing was off limits. Comedians have a responsibility to shine a light on the darkest things in the world, that’s what Joan did. People really addressed that today,” he said after the service.

Guests exited the funeral to the sound of bagpipes and some mingled and hugged as many hundreds of fans, along with dozens of reporters, photographers and television crews, waited behind barricades to get a glimpse of Rivers’ friends and family.

The Brooklyn-born comedian wrote in her 2012 book “I Hate Everyone … Starting With Me,” about wanting her funeral to be a big showbiz affair and that is what it was.

“It really was so funny. Howard Stern opened with an X-rated joke,” he said about the radio and TV personality.

“Cindy Adams, the columnist, followed shortly after. The rabbi was burying his head as the F-bombs were launched. And then Hugh Jackman nailed it with a great Broadway song. So it was a real New York show. It was exactly as Joan would have wanted it,” he added.

The comedian’s only child, daughter Melissa, also spoke during the service.

“Melissa was strong, witty, courageous – all the things that Joan raised her to be,” said surgeon, author and television personality Dr. Mehmet Oz.

Radio and television host Billy Bush described the service as “irreverent to say the least.”

“Best funeral ever. Really. Joan Rivers would have loved it,” he tweeted.

The sharp-tongued, comedian died on Thursday at the New York hospital to where she had been rushed a week earlier. She had been put on life support after she stopped breathing during an outpatient procedure at a medical clinic.

The State Health Department was investigating the Yorkville Endoscopy Center where Rivers was treated. It is reviewing documents, medical records and interviewing staff and physicians at the clinic which opened in 2013.

During a career that spanned more than 50 years, Rivers was known for her raspy voice, numerous cosmetic procedures and the catchphrase “Can we talk?”

No topic or person was off-limits for Rivers, who joked about marriage and sex and was never apologetic about what she said.

She attributed her success to saying what everyone else was thinking. Her influence reached far beyond her New York roots. Tributes poured in from around the world.

Britain’s Prince Charles described Rivers, who attended his 2005 wedding to the Duchess of Cornwall, as “an extraordinary woman with an original and indefatigable spirit.”

Israeli President Benjamin Netanyahu said in a statement that she would be deeply missed.

Rivers originally wanted to be an actress. She started as a comedy writer before doing stand-up. She worked her way up to regular guest host for Johnny Carson on NBC’s popular “The Tonight Show.”