“Bitcoin Is Freedom”: Reflections on Bitcoin 2022

Once every year—barring pandemic, that is—tens of thousands of Bitcoin enthusiasts descend upon the City of Miami to celebrate Bitcoin, the first true cryptocurrency and still the largest in the world by market cap. Crypto Briefing was on the ground at Bitcoin 2022 to experience the sheer weirdness of what it means to have undying faith in Bitcoin.
A Pilgrimage in the Holy Land
When Mayor Francis Suarez, a vocal Bitcoin bull and proponent of cryptocurrencies in government, unveiled the new Miami Bull statue, he said its placement would cement Miami’s place as the Bitcoin capital—and therefore the future financial capital—of the United States. At once, Mayor Suarez implied Bitcoin (and cryptocurrencies, more generally) to be synonymous with both financial innovation and the way of the future. Modeled after Wall Street’s famous Charging Bull statue, the Miami Bull is a technocratic nightmare of a design from somewhere between the Terminator and a Transformer, its laser eyes and golden horns daring any other metaphors for financial independence to get in its way. 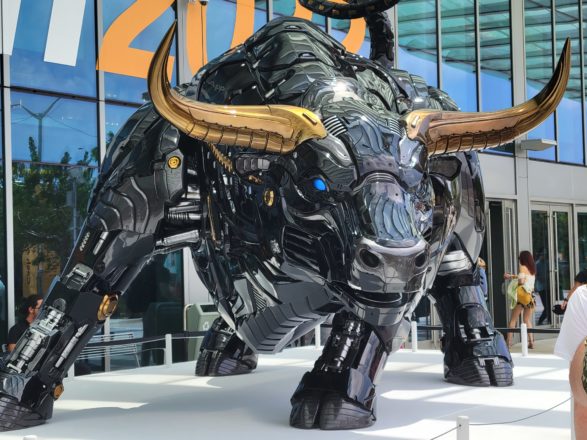 Photo credit: Jacob Oliver
For the next three days, pilgrims from around the world descended on this spot to get a picture with the Bull as they attended Bitcoin 2022, the largest annual gathering of Bitcoin advocates worldwide. Despite the price of Bitcoin slowly sinking throughout the week, shirts reading “Bullish!” abounded in the crowd and captured the overall air of confidence in the world’s flagship cryptocurrency.
Bitcoiners believe. For any perceived fault in them, there are a dozen other admirable qualities of Bitcoin people, chief among them being the fact that they believe in something. And when I say they believe it, I mean they believe it, the way my grandmother believed that Jesus was on his way back any day now. For Bitcoiners, distributed ledger technology is nothing short of messianic—it represents the advent not only of a new tech, but a new way of thinking about the world.
For the Abrahamic religions there is a promise of deliverance from evil; for Bitcoiners, deliverance from fiat. Fiat currency, I was told several times during our time in Miami, is not just a hoax but something much more insidious—it is a false prophet designed to lure us into a sense of complacency while value is systematically extracted from our lives by an elite ruling class. The figures within the international monetary system conspire to rule the world by devaluing its currency, which they do by seeking to extend their own control over monetary policy. If the comments section of any crypto thread is any indication, fiat money is the most egregious crime in the history of the world.
And Bitcoin is the solution to all that. If there is one belief that penetrates to the bone at the annual Bitcoin Miami conference, it is the idea that Bitcoin is here to liberate us all.
No God But God
I’ve never been much of a believer, in spite of my vaguely Pentecostal upbringing. I know what a church looks like, though, and when I overheard one panelist tell the crowd that the only thing that would save them from the coming collapse of society was accepting Bitcoin into their hearts, I knew what I was looking at. “Just look around at what’s going on in the world, it’s all on the edge of falling apart,” I heard a panelist say in passing. “The best thing you can do to protect yourself, to protect your family, is buy Bitcoin. Tell your grandparents, tell your parents—it’s your responsibility to educate people about Bitcoin.”
The tell-tale sign of the zealot is an intolerance of alternative ways of thinking, which soon manifests in exclusionary speech and behaviors. Contrasted to the Ethereum crowd, which seems generally interested in a wide variety of blockchain and cryptocurrency products, some Bitcoin aficionados can be rather exclusive in what they consider to be legitimate cryptocurrencies. These so-called “Bitcoin maximalists” (or “maxis,” if you’re feeling casual) are characterized by their complete and total faith in Bitcoin, and they are not afraid to express this view. Among the many entities that were vociferously booed by various audiences were: Solana, fiat money, Christine Lagarde, the concept of monetary policy, inflation, taxes, Janet Yellen, the Federal Reserve, Fantom, the IRS, SpookySwap, Ethereum, and Solana (again).
It was really something, then, when Ricardo Salinas, a Mexican businessman famously scarred by that nation’s hyperinflation during the 1990s, gave a particularly evangelical talk in which, with no hint of irony, he called the fiat currency system a religion, claiming: “their religion is not tolerant, and they hate heretics.” On the screen behind him displayed a trio of “devilish people,” as Salinas called them—Janet Yellen, Agustín Carstens, and Christine Lagarde, all bedecked with devil horns, emblematic of the dogmatism of fiat. He quipped the Bitcoin enthusiast’s favorite criticism of the Federal Reserve’s balance sheets, calling all $9 trillion dollars’ worth of assets that it holds “fake money.” He mocked the absurdity of trusting made-up money while waving a dollar bill in his right hand: “This fraud,” he said, “is worth less than toilet paper.”

Now, for just a moment I’d like to interject with a personal take, which you can take or leave as you will, but it’s this: all money is made-up. It is, to use the most proper term possible, imaginary—it doesn’t exist in nature, and to conceive of units of account is the product of a distinctly human imagination. If a thing has no monetary value on the basis that it’s “made up,” then Bitcoin’s net market cap is below zero. If you don’t believe me, ask anyone what their bags were worth in 2007.
Which is not to say that money isn’t real—it is. But it’s an invention, a technology. It’s tempting to think that money has to be backed by some real commodity in the world; in ancient Mesopotamia, units of barley and wheat were measured in silver, and the U.S. embraced the gold standard until 1971. These are conventions, though, only holding water because we have near universal agreement that these things have value. It’s easy to say that fiat money is backed by nothing, but in reality it’s quite efficiently backed by force of law—and that’s not nothing by any stretch of the imagination.
The Mark of the Beast
For all their talk of Bitcoin being the equivalent of ultimate freedom and salvation, it’s awfully hard not to notice the fact that these people believe first and foremost in money—and that in their minds, there is no money but Bitcoin.
Other people noticed too, not least of which were the fire-and-brimstone preachers on the sidewalks outside the convention, where I had literally just been told that the only thing that would save me from the end of days was owning Bitcoin. In a scene that couldn’t have been more on-the-nose if it were written for Hallmark, two old men politely foisted biblical literature into the crowd as it shuffled through the exit gates the way a huckster peddles free admission vouchers for gentlemen’s club. Their placard read:

As it came my turn, I took a rather tawdry-looking single-strip comic book called “THE BEAST,” from one man as he pointedly asked, “Do you know what the Bible says about money?”
“That you cannot serve two masters,” I said, “for you will hate one and despise the other: You cannot serve both God and money.”
“That’s right,” he said.
“Yeah,” I said, “I’ve read it before.”

I continued on my way and flipped through the comic. It was about the Book of Revelation, in which the ultimate false prophet ascends to absolute power over the entire world through financial exploitation and outright violence. Having recently heard more than one speaker (including the aforementioned Salinas) decry the idea of central bank digital currencies—the ultimate tool of financial surveillance and censorship—I couldn’t help but notice the very same paranoia in its pages: 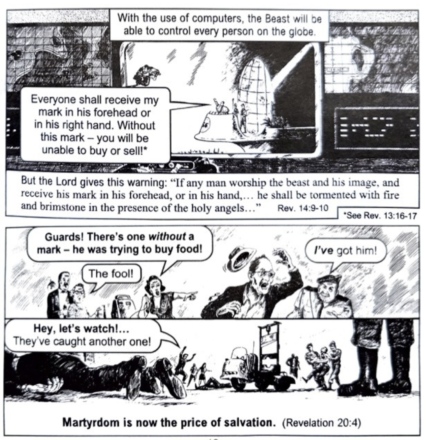 Jack D. Chick, “THE BEAST” (Chick Publications, 1988)
It’s incredible how much two groups of people can have in common and have no awareness of it. Replace “the Mark” with “CBDC” and you have the exact same apprehension about government overreach as you had 2,000 years ago. While those around me ushered in a brave new world, I heard the words of David Byrne floating freely through my head: “Same as it ever was, same as it ever was.”
The Future of Finance
The strict utopianism of the Bitcoin community also warrants a modest amount of scrutiny. Words of caution came from the unlikeliest of places in the form of a fireside chat with controversial public intellectual Jordan Peterson, who seemed to count himself among the “crypto-curious” rather than the full-blown believers. Peterson, who is something of an outsider to the Bitcoin community, having only recently developed an interest in crypto, warned a packed room that the idea that a revolutionary technology would have nothing but positive effects was profoundly short-sighted. “There will be many things you did not predict,” he ominously told a silent room.
But who knows? They may be right. With the likes of Janet Yellen and even Jamie Dimon apparently changing their tune on cryptocurrency, maybe the recognition of blockchain technology as the true-world changer its proponents claim it to be is right around the corner. Maybe during the next recession, Bitcoin will stay strong as other currencies falter because of its decentralized nature and lack of affiliation with any sovereign nation.
But maybe not.
Ecclesiastes says in its closing pages: “Divide your means seven ways, or even eight, for you do not know what disaster may happen on earth” (11:2). Not content to give us mere investment advice, the teacher of Ecclesiastes goes on to remind us of the fragility of our predictions, as well as of the finality of disaster when it does occur:

“Whether a tree falls to the south or to the north,
in the place where the tree falls, there it will lie.”

All money carries some risk. All national currencies run the risk of collapsing, all digital assets can go to zero, and all stocks can tank just as hard as they’ve done in the past. The value of money is built on belief and trust, and anyone who’s ever experienced a breach of those things knows just how difficult it is to restore them. None of this is intended to spread FUD all over the conference as its participants reflect on their week in Miami. It’s only by way of saying that absolute certainty in anything, no matter how sure you feel about it, is always going to be dangerous.
That said, it’s better to believe in something than in nothing. Bitcoin enthusiasts are believers, and with that they bring a kind of confidence that can’t be replicated. If anything indicates a bullish future for what is still the world’s most popular cryptocurrency, it would have to be that.
Disclosure: At the time of writing, the author of this piece owned BTC, ETH, SOL, FTM, and several other cryptocurrencies. Crypto Briefing is a media sponsor of Bitcoin 2022.

User rating: 0.00% ( 0
votes )
"Crypto Is Like the Eiffel Tower": Reflections on Paris Blockchain Week 2022 Should You Play Axie Infinity: Origin?