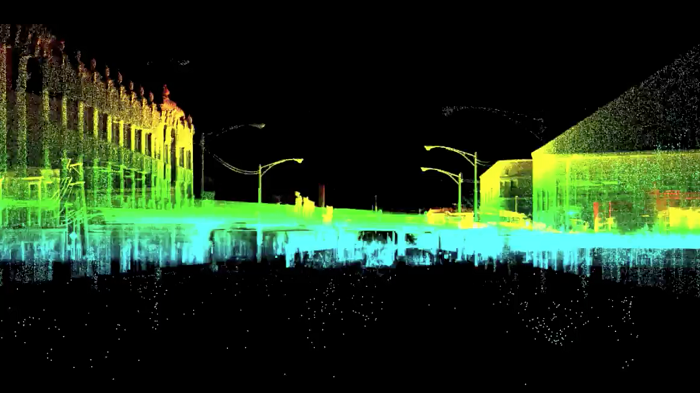 Even if you’ve never heard of lidar, you’ve heard about the things it can do. The technology has been harnessed for everything from the Makerbot 3D printer to Google’s potential self-driving car. Existing in some form since the ‘60s, lidar a light-based radar that senses and analyzes reflected light in order to make an exact 3D copy of any shape or environment.

Dr. Aaron Morris, a roboticist and entrepreneur on the cutting edge of 3D lidar research, said that in laypersons’ terms, think of lidar as a kind of virtual tape measurer, “except instead of rolling out a physical tape measure, it’s a beam of light, and a sensor measures how long it takes for it to bounce back to its source.” Multiply that bouncing laser beam by the thousands, make the source a rotating mirror, put the whole thing on a moving rover and you’ve got millions of data points mapping out a 360 degree view of a 3D space.

Though it sounds simple, the resulting breakthroughs have been nothing short of revolutionary. Here are seven ways that lidar is helping us live in the future.

This spring, lidar-wielding archaeologists happened upon the stuff of legend. After scanning the Mosquitia rainforest in Honduras with laser-pulsing planes, they encountered unusual lumpy shapes that could be ruins. The most optimistic origins for the site is the Ciudad Blanca, or “the White City,” a mythical “lost city” whose existence has never been confirmed.

Lidar isn’t just for discovering new things, but for keeping track of what’s old. At the company he founded, Allpoint, (which has since been acquired by his current employer, Autodesk,) Morris has used lidar to scan wastewater management pipes and make sure what’s currently underground matches up with the original plans.

“Think about the impact that hitting an underground pipe or waterline has on residents in a neighborhood,” he said. “Lidar means we can be more efficient in how we do things. We can find out what’s underground before construction starts.”

Have you ever wondered how stadiums, campuses and other spaces prepare for an unusually high-security event, like an in-person visit from the president? More and more frequently, the answer is 3D lidar.

The event space may contract a company like Autodesk to survey the area with 3D lidar. Then, once the space is mapped, it’s easier to analyze, placing entrances, exits, crowd control and snipers in advantageous positions around the 3D shape.

“Any time the President goes anywhere, it’s always documented with 3D modeling,” said Morris. “They get that place digitized to the millimeter in order to do all sorts of planning and section people off. Whenever there’s a big event, there’s a lot getting captured in 3D.”

Imagine you’re a firefighter trying to rescue people from a burning building. You’re being radioed to upstairs in order to reach survivors. But suddenly, the ceiling caves in and your path to the stairwell is blocked off. Those survivors might be out of luck unless the person on the radio has building blueprints to show you an alternate route.

Lidar scanning could ensure up-to-date 3D scans of all buildings. And since lidar data is processed by machines, it can be used to instruct robots to do the rescuing in areas too dangerous for human rescuers. In cases for determining potential human danger, a rover equipped with a lidar scanner can replace a human surveyor.

In one case, Morris and his team assisted a concrete plant that experienced a cave in. Instead of sending people into the resulting crevice, Morris ordered a lidar scan. The resulting 3D map revealed that the plant was sitting on top of a natural underground cave. Lidar showed which parts of the plant were in danger and needed to be reinforced.

Of course, if a technology exists, there’s always a chance of it falling into the wrong hands.

In something of a perversion of security uses for lidar, criminals could use 3D scans of a building or event space in order to pinpoint its weak spots and infiltrate it. Since much of the 3D mapping of our world is being placed in the public domain alongside Google Maps and related technologies, it could be easy to access. It’s still “could,” because there has yet to be a documented crime that makes use of lidar.

More often, lidar is used to detect criminal activity rather than encourage it, right at the scene of the crime. Its millions of data points can create the most accurate possible scan of the crime scene and all the objects within it. Also, since lidar’s lasers provide their own light, it can detect up clues that a regular camera might miss.

User rating: 0.00% ( 0
votes )
Why 65 Is Too Young to Retire Tips For Making Your International E-commerce Website SEO-Friendly