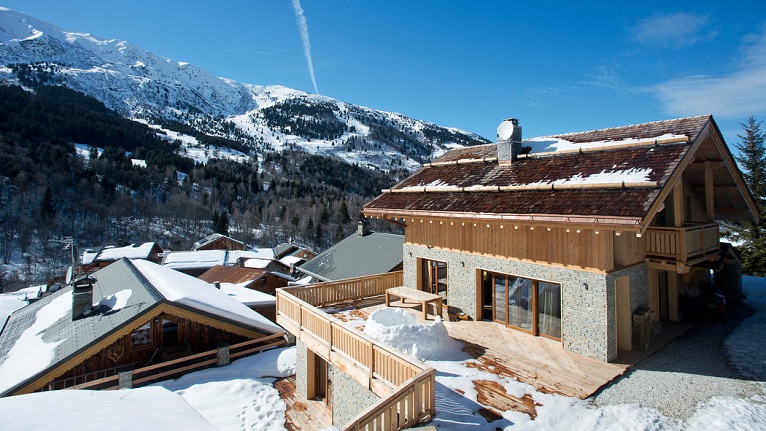 This chalet, in the heart of Méribel village in Les Trois Vallées ski area, dates to the 1980s and has had a full renovation and expansion that was completed in December. Traditional Alpine architecture, with an overhanging roof and larchwood-and-stone construction, contrasts with a modern, minimalist interior accented by spruce paneling.

The main house has about 2,300 square feet of living space on three levels, and a 700-square-foot guest cottage on the property has two additional bedrooms. Ski-friendly features include a large changing room and storage area with boot heaters, a self-contained sauna and a Jacuzzi.

The chalet is on a sloping 0.2-acre plot, with a flight of stairs leading down to the front door. Inside, an expansive living/dining room of about 650 square feet has unobstructed views of ski slopes and mountains through two-story-high windows on three sides. A central wood-burning fireplace provides cozy warmth, in addition to electric underfloor heating, and sliding doors open to a large wood wraparound terrace. The kitchen, also with mountain views, has appliances by Whirlpool, including a refrigerator with ice maker, an induction cooktop and a wall-mounted oven. The timbered ski storage and changing room is also on this floor, as is a bathroom.

All six bedrooms are en suite; there are two master suites, each of about 250 square feet, on the second floor, both with high, sloping ceilings, balconies and mezzanine windows that overlook the living area. The remaining four bedrooms are on the ground level, which is surrounded by a wraparound wood patio with a whirlpool tub and small sauna house.

The two-story guest or staff cottage is reached via a heated stone staircase off the patio, and has two bedrooms and a bathroom on the upper floor, and a living room opening to a terrace on the ground floor.

The property is about 500 feet from the slopes, said Andrew Beale of Free Spirit Alpine, one of the listing agencies, but easier access is via a free shuttle bus. Restaurants and shops in central Méribel are within a five-minute walk, Mr. Beale said.

There are several ways to reach Méribel: the nearest airport, Chambéry-Savoie, is about 90 minutes by car; the Geneva airport is about a two-hour drive, as is the airport in Lyon, France; the airport in Turin, Italy, is about three hours away. Méribel is about six and a half hours from Paris by car — not including traffic in the high ski season, which can be daunting.

Les Trois Vallées, or the Three Valleys, bills itself as the largest ski area in the world, with 180 ski lifts and 375 miles of slopes. The vast domain includes the resorts of Courchevel, La Tania, Méribel, Brides-les-Bains, Les Menuires — Saint-Martin de Belleville, Val Thorens and Orelle.

Real estate is generally divided into three main communities, agents said: Saint-Martin de Belleville, generally the least expensive; Méribel; and Courchevel, an area of which, Courchevel 1850, is among the world’s most expensive property markets. Buyers in the Three Valleys can find everything from studio apartments that start at around $100,000 to $50 million-plus chalets that can rent for hundreds of thousands of dollars a week in the high season.

“There’s a budget range and a location type to suit everybody, and you get to link up to this incredible area,” said Heather Byrne, a regional manager for Leggett Immobilier. Still, she said, “everyone aspires to buy a chalet” on the slopes or within walking distance, and those start at around $1.1 million in Saint-Martin de Belleville, and around $3.3 million in Méribel and some parts of Courchevel. Buyers who don’t mind driving to the slopes or to restaurants and shops can find chalets outside the main settlements starting at around $550,000, Ms. Byrne said.

Value for money can also be found in the Courchevel 1650 area, Mr. Beale said, as some of the older and less attractive apartment buildings and chalets are being renovated following a push by local officials. “It’s a brilliant resort for families,” he said, “but it’s always been a bit overlooked.”

Because the area is so diverse, agents said it was difficult to be specific about price trends. After the recession of 2008, Mr. Beale said: “It depended on what you had and where it was. If you were good in both property and location, then prices were stable. If you had a difficult property in a difficult location, then you struggled and had to cut your price accordingly.”

In general, agents said that the resorts’ oldest ski-specific properties, now decades old, were not selling well but that new construction or renovations in move-in condition at all price levels were moving quickly.

Several larger economic factors are influencing the market this year, agents said. The Russian ruble has lost about half its value against the euro, driving away buyers from that market, but a sharp rise in the value of the American dollar and British pound has more than compensated.

“We have a lot of English people buying this year,” said Joffray Vallat, an owner of Vallat Immobilier. “It’s incredible. We haven’t seen that in 10 years.”

Mr. Beale agreed, saying: “We’re the busiest we’ve been since 2005. It’s crazy, really. It’s the change in the exchange rate that’s done it.”